Just a quick congratulations right up top to actress Tatiana Maslany for her Best Actress in a Drama Series nomination for the Broadcast Television Journalists Association’s Third Annual Critics’ Choice Television Awards. That’s huge for a sci-fi show, and proof that critics see how amazing she is pulling multi-character duties. On with the review!

BBC America’s Orphan Black is leading viewers towards answers to some of its mysteries, while inserting new ones in their place, and it’s continually impressive how fluidly these plots weave in and out of one another without jarring the viewer’s attention span. “Unconscious Selection” is the ninth episode of the season, and there are just two more episodes to deliver what was initially just a one-season story. I’m hoping a lot of thought went into the endgame, and then whatever sub-endgame we’re given in the meantime.

I liked the things that happened during tonight’s episode, but I really didn’t enjoy much of how it was delivered. After Kira got hit with a car at the end of last week’s episode, I kind of expected some tense hospital scenes, but instead, we find out that Kira is able to heal at a very rapid rate, which is quite interesting. So with that whole smashed-by-a car thing out of the way, Helena’s keeper, Tomas, is the only one putting her at risk, since Dr. Leekie doesn’t appear to know of her presence. But here’s the thing: a self-serving religious nut is perfectly analogous to Leekie’s progressive stance on science, but the non-relationship between Tomas and Helena is ridiculously melodramatic and over-the-top and does a fine job of ripping me right out of the show’s reality. After a bunch of finagling, he’s locked up in a cage, and perhaps Sarah will send Leekie after him. So let’s stop talking about his useless ass.

While every character gets their own story this week, Sarah’s is the only one that actually gets furthered – and Beth’s, by extension. It’s only a matter of time before Art and Angie catch up with her, even though Art is still on Beth’s side. However, he watches the surveillance footage of Beth’s suicide, so he’s got no personal investment in this thing at all. Except, Sarah knows that his involvement in the Maggie Chen shooting could get him in a lot of trouble. It’ll be fun to see which one of those outcomes outweighs the other in Art’s mind. He gives up Sarah’s name to Angie and their superior. It’s coming down next week.

Meanwhile, she meets up with Leekie, who is only interested in finding his white whale, Helena. We get the Bond villain info-dump about the religious group who took Helena in, and that Tomas and Maggie Chen found her and brainwashed her into killing the other clones. Pretty interesting, even if it wasn’t revealed in an exciting way.

But there are two jaw-dropping moments – ones that you may or may not have seen coming, given the limited amount of ways for this story to unfold. When Sarah doesn’t show for a meeting with Leekie and Paul, Leekie calls someone to let them know, and it is almost definitely another clone. We can only see the reflection, but it looks enough like the actress to assume it. That, and why would they hide the face of someone we wouldn’t recognize?

Moment two comes in the form of Amelia, Sarah’s South African birth mother, arriving at Mrs. S.’s house. South African? But how? She was an in vitro surrogate mother for a couple that she eventually discovered were scientists and not the actual specimen donors. Feeling threatened, she ran away…with both Sarah and her twin, Helena. Bam! Twist! Bam! Twin clones! This was also a dialogue-heavy reveal rather than something more organic, but it worked out nicely in the end.

Meanwhile, Cosima breaks it off with Delphine, clearly hurt after finding out that Delphine has been working with Leekie all along. Not sure where this is going to go. Not sure if I care, really. The more important Cosima scene is when her nerdy lab buddy finds out that the clones’ DNA isn’t exactly the same, and that there’s a synthetic strand embedded within that tells them apart.

In the weakest of the stories, Donnie and Aynesley give Alison an intervention, with a priest and all the neighbors involved. Not knowing this, Alison and Fe were buddied up already, and he helps her through it all. It ends with her blowing up on Aynesley, which provokes a vicious threat. Still not clear if she’s actually a monitor or not. I can’t think she is, now that it’s been hinted at so many times. In any case, I like seeing Alison’s decompressed attitude now that she feels she’s ruined her life. Fe is a good one for her to pal around with while Sarah is doing important shit.

And that’s about it, folks. We know Leekie isn’t top dog in the game, unless he was lying. But if he wasn’t, then who was? Are Stephen Harper, David Cameron, and Obama at the end of this rabbit hole? We’ll find out soon. Or won’t we?

Find all my past and future Orphan Black reviews here. Thanks for reading! 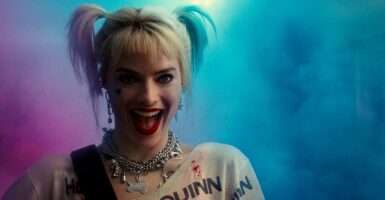 Birds Of Prey Explained: What The End Means And What’s Next For Harley Quinn