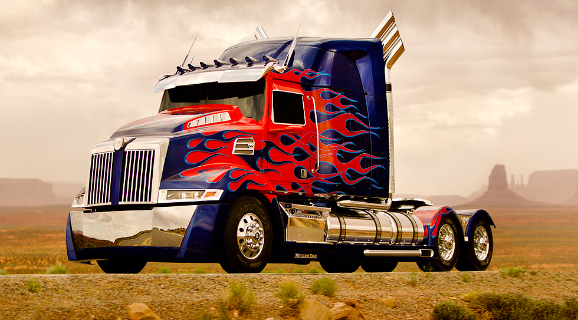 Coming off the critical and somewhat commercial success of the kidnapping weightlifter movie Pain & Gain, Michael Bay has already jumped into principal photography for his next full-length feature film, Transformers 4. The blockbuster director has often said that the new Transformers movie would be the first entry in a completely redesigned Transformers film series, and from the looks of the film’s Optimus Prime, Michael Bay was correct about the redesign part.

The 48-year-old director took the opportunity to reveal the new-and-improved Optimus Prime on his personal website. The leader of the Autobots looks really good! Exchanging sharp edges with rounded ones, Optimus Prime has also gotten a new paint job and looks ready to “roll out” with his Autobot team. Bay’s website notes that this is “The completely upgraded, custom-built Optimus Prime from Western Star (a subsidiary of Daimler Trucks North America).” I wonder what the redesigned Optimus Prime will look like in his robot form.

There is still not much known about Transformers 4’s plot, but it will take place four years after the events of Transformers: Dark of the Moon. There is some speculation that the new film might feature the civil war between Autobots and Decepticons on Cybertron, the Transformers’ home planet, but there hasn’t been anything officially announced regarding the film’s narrative.

What we do know is that Transformers 4 will follow a new cast of actors, including Mark Wahlberg, Jack Reynor, Nicola Peltz, and Brenton Thwaites, who will replace Shia Lebouf, Megan Fox, and Rosie Huntington-Whitely from the previous Transformers films. The flick will also introduce new AutoBots and Decepticons.

Transformers 4 will hit theaters everywhere on June 27, 2014, in 3D and IMAX. Watch Optimus Prime transforming from Transformers: Dark of the Moon below: