Neil Gaiman Returns To Doctor Who: This Week In Science Fiction 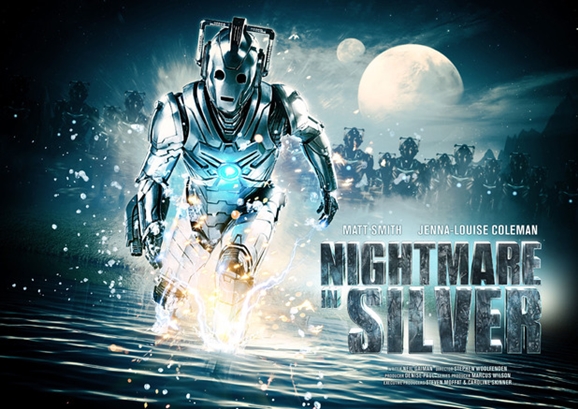 Anything with the name “Neil Gaiman” attached is generally worth at least a curious glance, and when it’s in the context of the British writer penning his second episode of Doctor Who, there’s all the more reason to be excited. He won a friggin’ Hugo for his 2011 episode “The Doctor’s Wife,” and he’s back this Saturday night with “Nightmare in Silver,” and it will pit the Doctor and Clara against the Cybermen.

Gaiman always manages to put his own unique spin on existing universes, whether in Doctor Who or his 1998 Babylon 5 episode, “Day of the Dead,” so I can’t wait to see what he does with the Cybermen. Let’s face it, they’re second only to the Daleks when it comes to being overused in the show’s modern incarnation, so a Gaiman twist may be just what they need. The episode is also said to be trying to make them scary again, which is a worthy goal. “Nightmare in Silver” will find “The Doctor and Clara arrive at the dilapidated theme park Hedgewick’s World and are confronted by the Cybermen.” Sounds like a good time to me.

Defiance (Syfy, 9/8c) — “A Well Respected Man”
“Kenya is kidnapped; Rafe moves a step closer to learning the truth about his son’s death.” It was the one-armed man what done it.

Revolution (Syfy, 10:01/9:01c) — “The Love Boat”
This show has definitely improved since returning from hiatus, primarily because it has a more interesting goal than “save the brother who is annoying as hell.” It’ll be interesting to see if they get around to turning the power back on early, or if that remains an end-of-series milestone.

Warehouse 13 (Syfy, 10/9c) — “Parks and Rehabilitation”
“Artie has a few hurdles to overcome before he can get back to work; Pete and Claudia team up on a murder investigation involving a radical environmental group.” 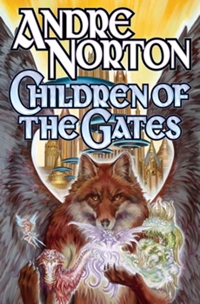 “Children of the Gates” by Andre Norton
Via Amazon:

Here Abide Monsters: On a world where parallel and alternate universes intersect, Celtic faery folk, modern humans, and inhabitants of a distant future share the planet’s surface. There are also aliens in flying saucer which are capturing and enslaving new arrivals who fall through the “gates.” One group of new arrivals meets a protector, a man who calls himself the Herald. He promises safety—but in exchange, he requires a piece of their souls in payment.

Yurth Burden: Two races share Zacar: the plains dwelling Raski and the mountain dwelling telepaths, the Yurth. The two are often in contention along their borders, and terrible war periodically breaks out between them. When a young Yurth woman goes on her coming-of-age vision quest, one young Raski warrior follows her—and together they discover a secret that will surely unbalance their world and may change Zacar forever. 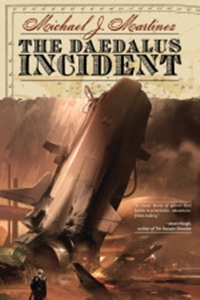 “The Daedalus Incident” by Michael J. Martinez
Via Amazon:

Mars is supposed to be dead…

Bizarre quakes are rumbling over the long-dormant tectonic plates of the planet, disrupting its trillion-dollar mining operations and driving scientists past the edges of theory and reason. However, when rocks shake off their ancient dust and begin to roll—seemingly of their own volition—carving canals as they converge to form a towering structure amid the ruddy terrain, Lt. Jain and her JSC team realize that their routine geological survey of a Martian cave system is anything but. The only clues they have stem from the emissions of a mysterious blue radiation, and a 300-year-old journal that is writing itself.

Lt. Thomas Weatherby of His Majesty’s Royal Navy is an honest 18th-century man of modest beginnings, doing his part for King and Country aboard the HMS Daedalus, a frigate sailing the high seas between continents…and the immense Void between the Known Worlds.

With the aid of his fierce captain, a drug-addled alchemist, and a servant girl witha remarkable past, Weatherby must track a great and powerful mystic, who has embarked upon a sinister quest to upset the balance of the planets—the consequences of which may reach far beyond the Solar System, threatening the very fabric of space itself.

Fringe: The Complete Fifth Season (Blu-Ray, DVD, Digital Download)
The final season leaps to the future and focuses on an all-out war between our beloved Fringe team and the bald far-future hat fetishists known as the Observers. It’s a rousing finale to a show that became one of my favorites. 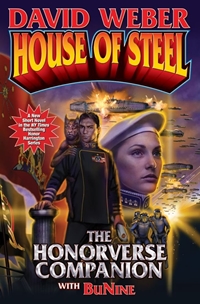 “House of Steel: The Honorverse Companion” by David Weber
Via Amazon:

A new short Honorverse novel, plus a compendium of tech, specs, and history to accompany the blockbuster series.

An all-new David Weber Honorverse short novel, I Will Build a House of Steel, chronicling the early days of the Manticoran Star Kingdom and the reign of King Roger.

Have you ever finished the latest Honor Harrington novel from David Weber and wished you could linger in Weber’s Honorverse just a bit longer? Now you can with this treasure trove of tech, specs, and insights on David Weber’s mega best-selling Honor Harrington series. Orbital characteristics of key planets, regimental order of the Royal Navy, backstory on the history and drama of the Star Kingdom’s birth and early days—you’ll find it all here, thoughtfully arranged by the Bureau 9 Weber research group, and overseen by David Weber himself. 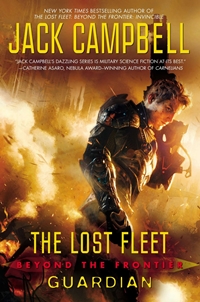 “The Lost Fleet: Beyond the Frontier: Guardian” by Jack Campbell
Via Amazon:

Admiral Geary’s First Fleet of the Alliance has survived the journey deep into unexplored interstellar space, a voyage that led to the discovery of new alien species, including a new enemy and a possible ally. Now Geary’s mission is to ensure the safety of the Midway Star System, which has revolted against the Syndicate Worlds empire—an empire that is on the brink of collapse.

To complicate matters further, Geary also needs to return safely to Alliance space not only with representatives of the Dancers, an alien species, but also with Invincible, a captured warship that could possibly be the most valuable object in human history. Despite the peace treaty that Geary must adhere to at all costs, the Syndicate Worlds regime threatens to make the fleet’s journey back grueling and perilous.

And even if Geary escorts Invincible and the Dancers’ representatives safely unharmed, the Syndics’ attempts to spread dissent and political unrest may have already sown the seeds of the Alliance’s destruction… 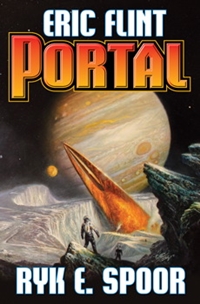 The sequel to Boundary and Threshold. New York Times Best-Selling Author and a Rising Star of SF and Fantasy Continue their Popular Space Adventure Series.

The sequel to Threshold, Book Three in the Boundary series.

Madeline Fathom had miraculously landed the crippled Nebula Storm on Europa. She joined on that frozen moon of Jupiter the stranded crewmembers of the ill-fated EU vessel Odin. The Nebula Storm‘s reactor was ruined in the landing, the Odin’s shuttle can’t make the trip back home, and the only vessel that could have make the journey to save them has just been destroyed by a renegade crewman, bad luck, and the remorseless forces of nature.

But Madeline, Helen Sutter, A.J. Baker and the team have one card left to play. All they have to do… is survive lethal radiation, vacuum, and ice as hard as steel while they figure out how to make Nebula Storm fly again.

But even as they prepare to make the journey home, Europa has one more discovery waiting for them… a discovery that might be the deadliest trap in the Solar System!

“Tales of Majipoor” by Robert Silverberg
Via Amazon:

Hailed as “one of the most fully realized worlds of modern science fiction,” (Booklist) Majipoor is a planet unlike any other, with countless untold stories. Now, available for the first time in one volume, science fiction grand master Robert Silverberg presents seven tales that chronicle thousands of years of Majipoor’s history, from the arrival of the settlers of Old Earth, to the expansion of vast cities, to the extraordinary life of Lord Valentine. Within these stories lie the secrets of Majipoor, a wondrous world of incredible imagination… 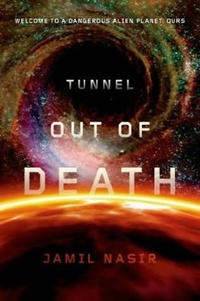 “Tunnel Out of Death” by Jamil Nasir
Via Amazon:

Heath Ransom, former police psychic turned machine-enhanced “endovoyant” private investigator, is hired to find the consciousness of the rich and comatose Margaret Biel and return it to her body. Tracking her through the etheric world, he comes upon a strange and terrifying object that appears to be a tear in the very fabric of reality. He falls into it—and into an astonishing metaphysical shadow-play.

For Margaret is a pawn in a war between secret, ruthless government agencies and a nonhuman entity known only as “Amphibian.” Their battlefield is a multi-level reality unlike anything humankind has ever imagined. When Heath learns to move back and forth between two different versions of his life, and begins to realize that everyone around him may be a super-realistic android, that is only the beginning of a wholesale deconstruction of reality that threatens more than his sanity….

Weird or What? (Syfy, 9/8c) — “Monster / Parallel Worlds”
The Shatner-hosted series goes snooping after Mothman in the first episode, followed by a second at 9:30/8:30c which involves “a boy transported by a strange machine.”

Big Brain Theory (Discovery, 10/9c) — “Pure Genius: Seek and Destroy”
The teams are challenged to create gizmos capable of “stopping a missile with a missile.”

MythBusters (Discovery, 9/8c) — “Deadliest Catch Crabtastic Special”
The ‘busters determine whether getting your foot caught on a crab pot will drag you to the bottom of the ocean.

Nova (PBS, 9/8c) — “Venom: Nature’s Killer”
I’m going to assume this isn’t about the notorious Spider-Man villain, but if it is, I hope they’ll get to the bottom of why Spider-Man III sucked so much.

Star Trek #20 (IDW Publishing)
The ongoing Trek series has been focusing on the “origin stories” of the various Enterprise crew, and that wraps up this month with a look at Sulu and Chekov.

The second season ends with Finch and Reese working alongside unexpected allies to save the Machine from Root and the Decima organization. Meanwhile, Finch’s relationship with Nathan Ingram is discovered, along with his original motivations for wanting to save the irrelevant numbers from the Machine; and Det. Carter goes up against HR.

Da Vinci’s Demons (Starz, 9/8c) — “The Tower”
“Lorenzo demands that Leonardo’s estranged father defend his son in court. Later, Leonardo surprises a corrupt judge during a performance for visiting royals, and is surprised himself when the Turk makes an appearance at the workshop.”

Doctor Who (BBC America, 8/7c) — “Nightmare in Silver”
Neil Gaiman’s second episode is here! “The Doctor and Clara arrive at the dilapidated theme park Hedgewick’s World and are confronted by the Cybermen.”

With Paul missing, Sarah is forced to confront the conspiracy head on. But when Paul learns Sarah has kept essential information from him, the fragile trust between them threatens to shatter. Meanwhile, Cosima grows closer to Delphine and the dangerously fascinating Dr. Leekie.

Rise of the Dinosaurs (Syfy, 9/8c)
A biotech firm brings dinosaurs back to life, but rather than doing so on a remote island, they drop them into a museum exhibit in Los Angeles. This should go well.