In the decade or so since he played the evil Caleb on Buffy the Vampire Slayer and Captain Malcolm Reynolds on Firefly, Nathan Fillion has ascended to the rarified pantheon of geek gods that includes people like Harrison Ford and Bruce Campbell. And what’s not to like? He’s handsome. He’s funny. He has a marvelous singing voice. Some would say that he is a perfect male specimen, and who am I to argue? It only makes sense, then, that somebody decided to create an updated version of Leonardo da Vinci’s idealized male figure – the Vitruvian Man – with Fillion’s face. The Vitruvian Fillion is the creation of designer Mohammad “Hawk” Haque, and it’s even approved by Fillion himself. Even better, the image is available as both a poster ($14.95) or a T-shirt ($19.95). Here’s how Haque explained the picture to EW:

I had no doubt this illustration was going to raise quite a few eyebrows. So what’s the surprise? It’s absolutely in line with Nathan Fillion’s perfection. Men want to be him. Women want to be with him. It’s no wonder. When you’ve got a custom revolver with a barrel like that for a loincloth it’s official: You represent the ultimate in manliness.

Well, I can’t argue with that. 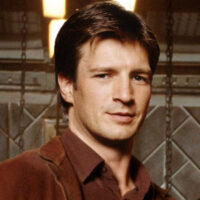