Michael Bay Reveals Freightliner For Transformers 4, Could It Be Motormaster? 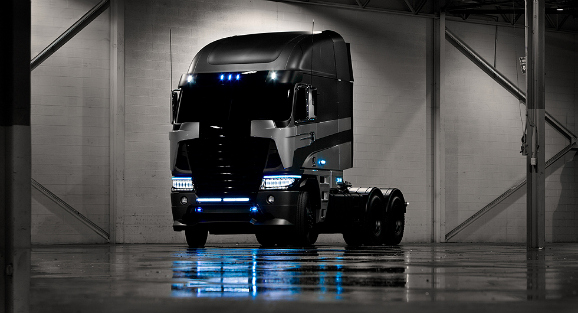 With the release of Transformers 4 exactly one year away, director Michael Bay is putting all the elements together to make the biggest Transformers movie to date. It really seems like all focus in the fourth installment of the Transformers film series will be on the Autobots and Decepticons, rather than the humans characters. This is the best possible approach, because who goes to a Transformers movie looking forward to the human drama of the film?

The 48-year-old director has taken advantage of having his own personal outlet with MichaelBay.com. The action auteur has been releasing images of the various Transformers in the new film — in vehicle form — and the latest is a new Freightliner. According to Michael Bay, “The adventure continues to transform with a very different offering from Daimler Trucks North America . . . the imposing 2014 Argosy cab-over truck by Freightliner.”

It is believed that this new Freightliner could be either the Autobot Ultra Magnus or the Decepticon Motormaster. If I were a betting man, I’d put my money on Motormaster because of the Freightliner’s color scheme. If the Transformers’ color scheme will resemble that of the previous films, then the Autobots are traditionally colorful with bright reds, eye-popping greens, and brilliant blues and oranges, while the Decepticons are almost always monochromatic black and silver. Check out Motormaster below:

A few days ago, Bay released an image of the new and very expensive Pagani Huayra that will be featured in Transformers 4. The stylish car would go great next to the completely re-designed Optimus Prime, Bumblebee, and (possibly) Sideswipe as a member of the Autobots. The new additions to the Autobots include Hound, Drift, and a car version of Slingshot, who has traditionally been a fighter jet in the past iterations of the Transformers. A Sonic RS Rally Car has also been added to the team and is believed to be a racecar belonging to the character played by Australian actor Brenton Thwaites.

If the image above does turn out to be Motormaster, this would also be the first Decepticon Michael Bay has revealed so far. Hopefully we will see more Decepticon badness in the upcoming weeks while Michael Bay, is busy during principal photography on Transformers 4.

Michael Bay has stated that Transformers 4 will unfold in the same timeline as the previous installments. The new film will take place four years after the events of Transformers: Dark of the Moon in Chicago, Illinois. Transformers 4 will also feature actors Mark Wahlberg, Nicola Peltz, Jack Reynor, Stanley Tucci, Sophia Myles, T.J. Miller, and Kelsey Grammer as the film’s human villain.

This Is The Best Actor Ever To Play Doctor Who