The Wachowskis’ upcoming space opera Jupiter Ascending has had a long, hard road to the big screen. It was originally supposed to open this past summer, but Warner Bros. instead opted to push it back to February 2015 — never an encouraging sign. The trailers made it look like it could be truly epic, or it could be an utter train wreck — and that’s more or less become par for the course when it comes to The Wachowskis. (For the record, I really enjoyed Cloud Atlas.) Earlier this week, Jupiter Ascending premiered at Sundance…and it did not go well. At this point, I don’t know what to think about this flick, but I do know one thing: I would sure as hell pony up for an “Art of Jupiter Ascending coffee table book.

Regardless of whether Jupiter Ascending kicks ass, sucks ass, or somewhere in between, the visual design of the film is sumptuous and stunning, and it’s on fine display in the 50+ images below. You can see Mila Kunis’ as unwitting galactic royalty, Channing Tatum as the albino half-wolf hybrid tasked with protecting her, and a gorgeous array of sleek spacecraft and alien landscape. If nothing else, Jupiter Ascending has given us some lovely options when it comes to desktop wallpaper. We’ll see what its legacy as an actual film will be after it opens in theaters on February 6th. 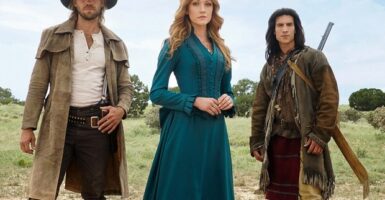