I’ll fully concede, “papercraft” was not even a thing that was anywhere on my radar, but if you’d asked me about it I would probably have assumed you meant origami or maybe some nice collage work. These papercraft creations by DeviantArtist TankBall are on a whole other level, one significantly above the little paper dude with the erection Gaff made in Blade Runner. Honestly, part of me doesn’t even want to know how these things were made; I’d rather treat it like a magic trick, just sit back and be impressed. It doesn’t hurt that TankBall has replicated two characters from my favorite game series of all time, and indeed one of my favorite science fictional things of all time, Mass Effect.

First up is Jack, aka “Subject Zero,” a powerful biotic with a bad attitude and a penchant for body art, first recruited as part of Commander Shepard’s suicide squad in Mass Effect 2. For his sculpture, TankBall has tackled her in my opinion better look from the third game, after she mellowed out a bit, grew some hair back, and became a fiercely protective teacher of young biotics at Grissom Academy.

TankBall also turned his talents to EDI, originally introduced as the artificial intelligence aboard Shepard’s vessel, the Normandy in the second game. During her freshman outing she was just Tricia Helfer’s voice and an occasional little holographic doodad, but the third game gave her a snazzy cybernetic body so she could go shoot Reapers alongside Commander Shepard and romance your pilot, Joker (Seth Green). (BioWare does love it some cross-species romance.) Here’s TankBall’s finished EDI, followed by her doing her very best Venus de Milo impression. It’s almost enough to make me want to take up papercrafting. Except not really because oy, all that work. You can see TankBall walking everybody through how he created these things in the videos below.

And hey, if he hasn’t gotten around to your favorite Mass Effect crew member yet, it looks like he’s got another one in the works… 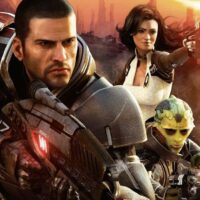