As the president of Marvel Studios, Kevin Feige holds the keys to the kingdom that is the Marvel Cinematic Universe. With this week’s Guardians of the Galaxy, the MCU is expanding into Marvel’s huge array of alien species, distant worlds, and cosmic heroes and villains. Even beyond the core team of the Guardians, some of those characters have already been teased in one way or another, most especially the Mad Titan Thanos, who plays a role behind the scenes in Guardians and is being positioned to be a major threat on down the line. In the midst of the chaos that was Comic-Con last week, Crave Online cornered Feige and got him to reveal a few details about Thanos, what other cosmic characters we might see in Guardians 2, and even how Doctor Strange’s magic might fit into the otherwise more science fictional big-screen Marvel universe.

Thanos was first teased in The Avengers‘ post-credits sequence, a brief moment that did little more than have him shoot a wry smile at the camera and reveal that he’d been pulling the strings behind Loki’s shenanigans. At the time, many assumed he’d be the Big Bad for Avengers 2, but that honor eventually went to Ultron instead. With Guardians we finally get to see a bit more of Thanos, once again as a mastermind behind other villainous players, in this case Lee Pace’s Ronan the Accuser. And since they’ve actually got an actor cast as Thanos this time around — Josh Brolin — we’ll get more than just a grin. But not that much more. Feige told Crave:

The idea was for it to basically be just another step forward based on what we saw in Avengers. In Avengers, you didn’t see anything, saw the back of his throne and his turn into camera three-quarters smirk. We wanted Ronan to be the bad guy [in Guardians]. We wanted to focus on the creation of the Guardians team itself, so we didn’t want to spend too much time with Thanos, but we wanted to showcase that there’s a guy behind the guy behind the guy. The Emperor to Darth Vader in The Empire Strikes Back. So we wanted to see a little bit more of him, a little bit of attitude, to see him and hear him for the first time, and just to get one of my favorite shots in the whole movie, him leaning back on his throne and smirking, which he does on every cover of every Thanos comic book, which is cool.

Guardians is likely going to sneak in lots of little tips of the hat at other familiar cosmic Marvel characters, and names such as Nova and Adam Warlock have been floated as likely contenders. Nova was the fan-favorite pick for Nathan Fillion’s top-secret cameo role for a while (sadly, it seems that’s not the case, at least not this time around), and Adam Warlock was teased in Thor: The Dark World, after his distinctive cocoon was spotted in the Collector’s collection. It seems inevitable that the Guardians roster will grow in the sequel, but Feige is still playing coy on exactly who might turn up for the next adventure of Star-Lord and company. When asked about the introduction of Nova or Adam Warlock, and even the possibility of solo films for those characters, Feige responded:

I think if Guardians works the way we certainly hope it works, that would probably be the franchise to meet a lot of those people. That would be our entrance into numerous other cosmic folk. If we spin those out into individual movies, that’s a question for down the line. But I think we would see those kinds of characters in a future Guardians movie.

Finally, there’s the subject of Doctor Strange. As Marvel’s Sorcerer Supreme, Strange represents another aspect of the Marvel Universe that we haven’t really seen on the big screen yet: the magical world. Up to this point, the MCU has very much skewed toward the science fiction end of the spectrum, and one of the reasons the character of Thor works as well as he does is because the MCU movies embraced Arthur C. Clarke’s notion that “any sufficiently advanced technology is indistinguishable from magic.” Thor and the other Asgardians may have once been worshipped as gods, but they are merely highly advanced extraterrestrial beings.

With a character whose nature is inherently magical, I’ve been really curious to see how the MCU would handle their vision of Strange, and it sounds like they’re staying on the same path they did with Thor. In the Marvel Universe, “magic” will likely just be a name for science we’re not clever enough to understand yet. Here’s Feige on the subject of Strange:

With Strange, it is a classic Marvel origin story, because he’s got one of the [best] origins ever, and it’s our opportunity to take that left turn into the supernatural. Now, what is the definition of supernatural? It varies. We like the idea of playing with alternate dimensions. Strange, in the crazy Ditko acid-trip way, traveling through dimensions and traveling through other realms is something we think is very, very cool. Playing with the perceptions of reality. I just watched the Neil deGrasse Tyson Cosmos series, which is amazing and which may as well be an acid trip. It may as well be Dr. Strange. It’s mind-bending and all based in physics and quantum mechanics. We’re going to play a lot with the notion of that as an explanation for how sorcerers do what they do.

Guardians of the Galaxy rockets into theaters tomorrow, August 1. Guardians 2 is slated for July 28, 2017. 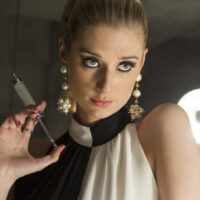