Mark Millar’s Starlight In the Works At Twentieth Century Fox Whether it be a new young adult book series, or a superhero comic, Hollywood movie studios are always on the look out for new properties to adapt. Sometimes they’re miserable box office failures, like Beautiful Creatures or The Spiderwick Chronicles, and sometimes they succeed, like The Hunger Games or Kick-Ass. Twentieth Century Fox hopes that their newest adaptation, Starlight, will find success with rabid comic fans.

According to Latino Review’s sources, Fox is looking to bring Mark Millar and Goran Parlov’s Starlight to the big screen. While the comic book has yet to be released, Starlight is described as Flash Gordon meets Frank Miller’s The Dark Knight Returns. The story follows a human who saves the universe, but when he comes back home to Earth, no one believes his heroic feats. He settles down, gets married, and starts a family, but is called upon to save the universe again 35 years later. This actually sounds like a thrilling, and very expensive, adventure story.

Star Wars: Episode VII consultant Simon Kinberg (X-Men: First Class, Elysium) is attached to produce the space opera for Fox. Millar is also a consultant at the studio, so it seems likely that he’ll be heavily involved with the new project. Despite his wide and loyal fan base, Millar is a controversial figure in the comic book world. His comments about women in comic books and rape have gotten him in hot water with many people. As a writer, Millar is most known for his work on books such as The Authority, The Ultimates, Marvel Knights Spider-Man, Ultimate Fantastic Four, Civil War, Wanted, and Kick-Ass. The latter two were adapted into live-action feature films.

The film adaptation of Wanted was a big success in 2008. The Timur Bekmambetov-directed film grossed more than $340 million worldwide, and fans of the film are still waiting to hear about a sequel. As for Kick-Ass, the comic book movie saw moderate success in 2010, taking in $96 million. The film performed better on home video, which helped spawn a sequel that was released this past August to diminishing returns at the box office and a very low critical response. The latest Millar adaptation is Matthew Vaughn’s The Secret Service, set for release in theaters on March 6, 2015. The spy thriller stars Colin Firth, Michael Caine, and Samuel L. Jackson. Vaughn also directed Kick-Ass.

While the project is not official yet, Latino Review has a good track record when it comes to breaking news in the geek comic book movie genre. Given the timetable, expect to hear something official soon, as it’s most likely that the new Starlight movie would be released sometime in 2016 or 2017. 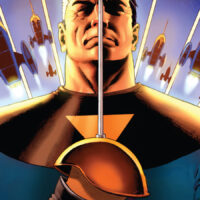