Lost Doctor Who Episodes Coming To Life Via Animation

For a show that’s been such a pop culture phenomenon in the U.K. (and to a lesser degree here in the States) for 50 years, it’s tragic that many of Doctor Who’s early episodes have been lost to history, or even outright destroyed. So when a thought-lost episode is resurrected, in full or in part, it’s big news for Whovians. Now fans have something new to celebrate, because two classic episodes are finding new life in animated form later this year.

First up is “The Ice Warriors,” originally broadcast in 1967 and starring Patrick Troughton as the Second Doctor. Two of the serial’s four parts were lost, but they’re being resurrected in animated form, and using the original audio tracks, which were thankfully still accounted for. As you might guess from the title, the serial marked the first appearance of the classic Who villain the Ice Warriors. If you’ve been paying attention to GFR lately, you probably already know that the Ice Warriors are returning to Who in an episode later this spring, so this will be a very cool opportunity for fans to look back at the Ice Warriors’ first appearance.

Here’s an early look at the work-in-progress episode from animation studio Qurios:

The other lost episode being recreated is just as cool. The fourth episode of The Tenth Planet, which originally aired in 1966, was lost sometime in the 1970s, with the only surviving clip being a brief one of First Doctor William Hartnell regenerating into Second Doctor Patrick Troughton. Given that it’s the first occurrence of the Doctor regenerating, it’s a huge Who landmark. As with The Ice Warriors, the lost episode of The Tenth Planet is being recreated in animated form, this one by the folks at Planet 55 Studios. You can take a look at the animated version of Hartnell’s regeneration below:

The restored version of The Ice Warriors will come to DVD on August 26th in the U.K. There will likely be a U.S. release at some point, but there is no official date at this time. The Tenth Planet will arrive later in the year, hitting DVD in late 2013 in the U.K. 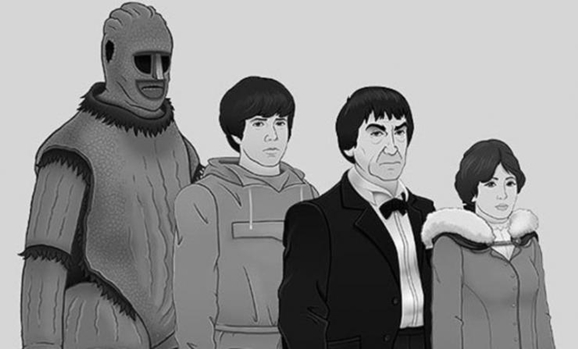