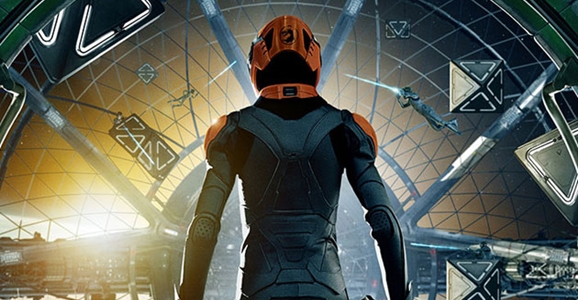 Well, the saga of Gavin Hood’s upcoming adaptation of Orson Scott Card’s novel Ender’s Game just keeps spinning further and further out of control. While the novel itself is a wonderful piece of science fiction, Card himself is a rather vehemently anti-gay bigot. The author has often publicly stated his views in what most consider a rather venomous manner, which has prompted gay rights groups to organize boycotts like Skip Ender’s Game.

Basically, this film has turned into a big old publicity nightmare, especially after Card issued a statement regarding gay marriage earlier this week. Lets just say his demands that people be tolerant of his intolerance ruffled some feathers, and caused even more controversy. You can read about that elsewhere, we have other matters to discuss at the moment.

Lionsgate, the studio behind Ender’s Game, is working overtime to repair the damage, and to distance themselves from Card’s unfortunate political leanings. Card is already sitting out Comic-Con, and now they issued a statement saying how strongly they disagree with his stance, openly declaring their support for the lesbian, gay, bisexual, and transgender (LGBT) community, and announcing they will hold a premiere of Ender’s Game to benefit LGBT support groups. I bet Card hates that.

Here is the statement:

As proud longtime supporters of the LGBT community, champions of films ranging from GODS AND MONSTERS to THE PERKS OF BEING A WALLFLOWER and a Company that is proud to have recognized same-sex unions and domestic partnerships within its employee benefits policies for many years, we obviously do not agree with the personal views of Orson Scott Card and those of the National Organization for Marriage. However, they are completely irrelevant to a discussion of ENDER’S GAME. The simple fact is that neither the underlying book nor the film itself reflect these views in any way, shape or form. On the contrary, the film not only transports viewers to an entertaining and action-filled world, but it does so with positive and inspiring characters who ultimately deliver an ennobling and life-affirming message. Lionsgate will continue its longstanding commitment to the LGBT community by exploring new ways we can support LGBT causes and, as part of this ongoing process, will host a benefit premiere for ENDER’S GAME.

In reality this is pretty cool thing to do. Studios are in a unique position to do some good with events like this, though it does suck that it took something ugly and hateful to bring it about. And you can’t help but pick up a distinct, covering-their-own-ass vibe from this letter. After all, Lionsgate has invested untold millions in Ender’s Game, and the last thing they want is a nasty public spectacle that results in people avoiding their movie.

I bet they’re hoping this whole thing will just blow over and go away, but they kind of walked into it, didn’t they? When I first read the book, I knew nothing about Card or his politics, and they’re right, that doesn’t bleed through into the novel or the story. But I spent three dollars on a used paperback, not millions of dollars to produce and promote a major motion picture. They must have done at least enough digging to know, and it’s hard to believe that in this process no one raised their hand and said, “this guy’s kind of a dick, it could be a problem?”

In the end, we’ll have to wait until November 1 to see if this controversy bites them in the ass and has any impact on the box office numbers. Honestly, I don’t know if it will make a difference in ticket sales one way or another, or if this is even big enough news that mainstream audiences will hear about it. Still, you can’t help but wonder that, if Lionsgate knew what they know now, they would have made the same choices.