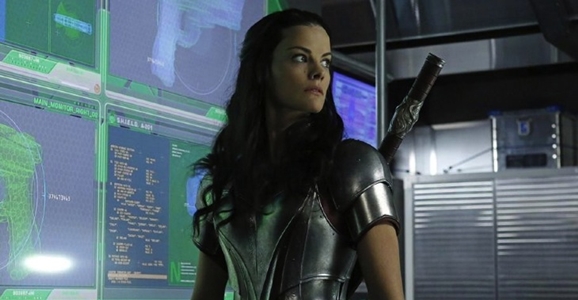 Marvel’s Agents of S.H.I.E.L.D. (ABC, 8/7c) — “Yes Men”
There’s not a whole lot happening on the TV front tonight, but if you’ve stuck with ABC’s woefully uneven Agents of S.H.I.E.L.D. — or even if you’ve already bailed — you might have a reason to tune in tonight. So far the show has had a couple of noteworthy cameos during its first season: Samuel Jackson popped up in the show’s second episode, and Stan Lee put in the requisite appearance in the February episode “T.R.A.C.K.S.” Tonight the show is bringing in another player from the big-screen Marvel Cinematic Universe: actress Jaimie Alexander, who will be reprising her role as Lady Sif from the two Thor movies.

The show previously tied into Thor: The Dark World for the November episode “The Well,” but while it involved Asgardian technology, it didn’t actually bring in any of the Asgardians we know so well. (Although we did get Peter MacNicol, which helped ease the pain.) I think much of the excitement when Agents of S.H.I.E.L.D. was first announced was at the thought of more direct interactions between the show and the events of the movies, but for the most part S.H.I.E.L.D. has focused on its own core of characters. That’s understandable, but also not much comfort when the characters and storylines so far haven’t really knocked it out of the park. The writers and producers keep insisting in interviews that there’s great stuff coming, but we’re about to see the 15th of only 17 planned episodes at this point, so they’re running out of time to bring the awesome. Scuttlebutt says S.H.I.E.L.D. will likely be returning for a second season, so here’s hoping the show finally hits its stride.

When Coulson and his team are attacked by Lorelei – a deadly seductress who escaped from Asgard — Thor’s Lady Sif, her longtime nemesis, steps in to try to save them.

In this epic spectacular, the BBC Natural History Unit use a brand new approach to delve deep into the natural world and explore its most critical dimension — time. 24 Hours on Earth travels moment by moment through a virtual day and celebrates the most extraordinary and spectacular examples of how animals and plants are adapted to exploit the 24-hour cycle. The two-part series features returnable characters that show the huge highs and desperate lows they face across a single day in the wild. It celebrates the most mind-blowing adaptations that life uses to exploit tiny windows of time. 24 Hours on Earth is a BBC/BBC AMERICA co-production and is executive produced by James Honeyborne. It will premiere as part of BBC AMERICA’s new BBC Earth programming block on Tuesdays. 24 Hours on Earth premieres Tuesday, March 11, 9:00pm ET.

Human guinea pigs are created by the artists, who are given bizarre medical devices to inspire their makeups.