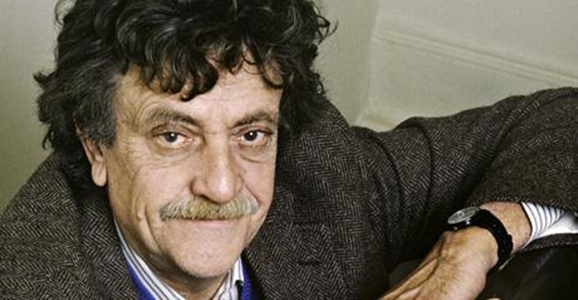 Kurt Vonnegut Kindle Sale
Kurt Vonnegut is one of my favorite writers, one of the rare authors assigned in school that I fell in love with enough to keep returning to over the years. The one problem is that I haven’t read any of his stuff since before my last big move, so all my Vonnegut books are currently packed away somewhere in my storage unit, hopefully entertaining and enlightening any rats, cockroaches, or other vermin who might happen by. (Please don’t eat my Vonnegut books, guys.) I suppose I could just drive down there and dig through the boxes to find them, but who has time for that? Thankfully Amazon is having a large-ish Kindle ebook sale, with some 400 titles marked down 85% off.

Needless to say, that’s pretty damn cheap. And while the books on sale don’t include much science fiction, it does have four of Vonnegut’s works marked down to a mere two bucks a pop. We’ve got the rundown of the four Vonnegut titles available below, beginning with Breakfast of Champions.

Breakfast of Champions (1973) provides frantic, scattershot satire and a collage of Vonnegut’s obsessions. His recurring cast of characters and American landscape was perhaps the most controversial of his canon; it was felt by many at the time to be a disappointing successor to Slaughterhouse-Five, which had made Vonnegut’s literary reputation.

The core of the novel is Kilgore Trout, a familiar character very deliberately modeled on the science fiction writer Theodore Sturgeon (1918-1985), a fact which Vonnegut conceded frequently in interviews and which was based upon his own occasional relationship with Sturgeon. Here Kilgore Trout is an itinerant wandering from one science fiction convention to another; he intersects with the protagonist, Dwayne Hoover (one of Vonnegut’s typically boosterish, lost and stupid mid-American characters) and their intersection is the excuse for the evocation of many others, familiar and unfamiliar, dredged from Vonnegut’s gallery.

The central issue is concerned with intersecting and opposite views of reality, and much of the narrative is filtered through Trout who is neither certifiably insane nor a visionary writer but can pass for either depending upon Dwayne Hoover’s (and Vonnegut’s) view of the situation. America, when this novel was published, was in the throes of Nixon, Watergate and the unraveling of our intervention in Vietnam; the nation was beginning to fragment ideologically and geographically, and Vonnegut sought to cram all of this dysfunction (and a goofy, desperate kind of hope, the irrational comfort given through the genre of science fiction) into a sprawling narrative whose sense, if any, is situational, not conceptual.

Reviews were polarized; the novel was celebrated for its bizarre aspects, became the basis of a Bruce Willis movie adaptation whose reviews were not nearly so polarized. (Most critics hated it.) This novel in its freewheeling and deliberately fragmented sequentiality may be the quintessential Vonnegut novel, not necessarily his best, but the work which most truly embodies the range of his talent, cartooned alienation and despair.

Welcome to the Monkey House:

This short-story collection Welcome to the Monkey House (1968) incorporates almost completely Vonnegut’s 1961 ‘Canary in a Cathouse,’ which appeared within a few months of Slaughterhouse-Five and capitalized upon that breakthrough novel and the enormous attention it suddenly brought.

Drawn from both specialized science fiction magazines and the big-circulation general magazines (Saturday Evening Post, Colliers, etc.) which Vonnegut had been one of the few science writers to sell, the collection includes some of his most accomplished work. The title story may be his most famous — a diabolical government asserts control through compulsory technology removing orgasm from sex — but Vonnegut’s bitterness and wit, not in his earlier work as poisonous or unshielded as it later became, is well demonstrated.

Two early stories from Galaxy science fiction magazine and one from Fantasy & Science Fiction (the famous ‘Harrison Bergeron’) show Vonnegut’s careful command of a genre about which he was always ambivalent, stories like ‘More Stately Mansions’ or ‘The Foster Portfolio’ the confines and formula of a popular fiction of which he was always suspicious. Vonnegut’s affection for humanity and bewilderment as its corruption are manifest in these early works.

Several of these stories (those which appeared in Collier’s) were commissioned by Vonnegut’s Cornell classmate and great supporter Knox Burger, also born in 1922.

Bluebeard, published in 1987, is Vonnegut’s meditation on art, artists, surrealism, and disaster. Meet Rabo Karabekian, a moderately successful surrealist painter, who we meet late in life and see struggling (like all of Vonnegut’s key characters), with the dregs of unresolved pain and the consequences of brutality. Loosely based on the legend of Bluebeard (best realized in Bela Bartok’s one-act opera), the novel follows Karabekian through the last events in his life that is heavy with women, painting, artistic ambition, artistic fraudulence, and as of yet unknown consequence.

Vonnegut’s intention here is not so much satirical (although the contemporary art scene would be easy enough to deconstruct), nor is it documentary (although Karabekian does carry elements of Jackson Pollock and Mark Rothko). Instead, Vonnegut is using art for the same purpose he used science fiction cliches in Slaughterhouse-Five; as a filter through which he can illuminate the savagery, cruelty, and the essentially comic misdirection of human existence.

Readers will recognize familiar Vonnegut character types and archetypes as they drift in and out through the background; meanwhile, Karabekian, betrayed and betrayer, sinks through a bottomless haze of recollection. Like most of Vonnegut’s late works, this is both science fiction and cruel contemporary realism at once, using science fiction as metaphor for human damage as well as failure to perceive. Readers will find that Vonnegut’s protagonists can never really clarify for us whether they are ultimately unwitting victims or simple barbarians, leaving it up to the reader to determine in which genre this book really fits, if any at all.

Rudy Waltz (aka ‘Deadeye Dick’) is the lead in this latter day Vonnegut novel. Waltz, our protagonist, moves through the book trying to make sense of a life that is rife with disaster; there is a double murder, a fatal dose of radioactivity, a decapitation, the total annihilation of a city by nuclear holocaust and, believe it or not, more. Waltz, a diarist, becomes symbolic of a person living a fraught post-technological life in which frailty is as likely to be a person’s undoing as any bomb.

It is this theme of Vonnegut’s — the impossibility of trying to live meaningfully in a meaningless world — that is ultimately central to this novel. Rudy Waltz (like some of Vonnegut’s other protagonists, Billy Pilgrim or Howard Campbell) is ultimately only a stand-in for Vonnegut himself who is really narrating for us as the lead witness and character here — the philosopher who is telling us why and what for. 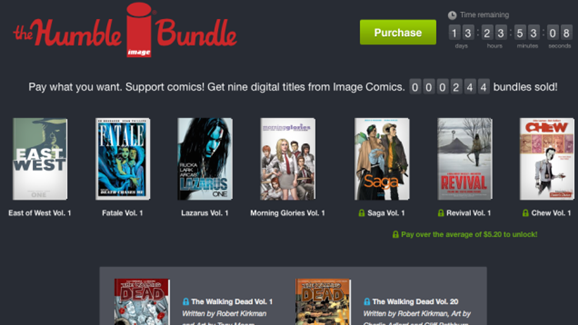 Image Comics Humble Bundle
If you’re not familiar with the so-called “Humble Bundle,” here’s the idea. You pay what you want for four different books, in this case “Volume 1” digital sets of four Image Comics titles. You also get to choose how your money is divided, splitting it between Image Comics, the Humble folks themselves for putting it together, and the charity Comic Book Legal Defense Fund, “a non-profit organization dedicated to the protection of the First Amendment rights of the comics art form and its community.”

East of West, Volume 1: 2014 Eisner Nominated. This is the world. It is not the one we wanted, but it is the one we deserved. The Four Horsemen of the Apocalypse roam the Earth, signaling the End Times for humanity, and our best hope for life, lies in DEATH.

Fatale, Vol. 1: Josephine is cursed, and in a series that darkly blends American crime noir with unnamed Lovecraftian horrors, we follow her from 1950s San Francisco, where crooked cops hide deeper evils, to mid-’70s L.A., where burnt-out actors and ex-cult groupies are caught in a web around a satanic snuff film…and in the middle of it all is Josephine, with a power to die or kill for.

Lazarus, Vol. 1: 2014 Eisner Nomination for Best New Series. In a dystopian near-future, a handful of Families rule, jealously guarding what they have. Forever Carlyle defends her family’s holdings through deception as their protector, their Lazarus. Shot dead defending the family home, Forever’s day goes downhill from there…

Morning Glories, Vol. 1: Morning Glory Academy is one of the most prestigious prep schools in the country, but behind it’s hallowed doors something sinister and deadly lurks. When six brilliant but troubled new students arrive, they find themselves trapped and desperately seeking answers in a place where nothing is what it seems to be!

Like we said, you can pay what you want for these, but it’s in your best interest not to be a cheapskate. If you pay over the average price for the bundle (currently at $8.87), you’ll unlock three more titles, and they’re just as good if not better than the others.

Revival, Volm. 1: For one day in rural central Wisconsin, the dead came back to life. Now it’s up to Officer Dana Cypress to deal with the media scrutiny, religious zealots, and government quarantine that has come with them. In a town where the living have to learn to deal with those who are supposed to be dead, Officer Cypress must solve a brutal murder, and everyone, alive or undead, is a suspect.

Chew, Vol. 1: Tony Chu is a detective with a secret. A weird secret. Tony Chu is Cibopathic, which means he gets psychic impressions from whatever he eats. It also means he’s a hell of a detective, as long as he doesn’t mind nibbling on the corpse of a murder victim to figure out whodunit, and why.

Feeling even more generous? If you pay more than $15, you’ll also get two volumes of Robert Kirkman’s The Walking Dead:

The Walking Dead, Vol. 1: The world we knew is gone. The world of commerce and frivolous necessity has been replaced by a world of survival and responsibility. An epidemic of apocalyptic proportions has swept the globe, causing the dead to rise and feed on the living. In a matter of months society has crumbled: no government, no grocery stores, no mail delivery, no cable TV. In a world ruled by the dead, the survivors are forced to finally start living.

The Walking Dead, Vol. 20: The biggest storyline in The Walking Dead history starts here. It’s Rick versus Negan, with a little help from everyone else!