Kevin Feige Confirms Zoe Saldana For Guardians Of The Galaxy

With the release of Iron Man 3 tomorrow, the Marvel Cinematic Universe officially enters “Phase Two.” Marvel Studios will release new movies that will eventually lead to Joss Whedon’s The Avengers 2 in 2015. One of the odder entries in the Marvel Cinematic Universe will be Guardians of the Galaxy, which will be released in 2014. Marvel producer Kevin Feige has now confirmed the casting of a very recognizable actress who will be joining her third big-screen space franchise.

Talking to Entertainment Weekly, Kevin Feige officially announced that Zoe Saldana will, in fact, join the cast of Marvel’s Guardians of the Galaxy. Saldana will play the sole female member of the Guardians: Gamora, the deadliest woman in the galaxy. Feige says that “audiences will respond to an alien Zoe Saldana,” in his interview with the entertainment outlet.

Of course, Saldana once played an alien in James Cameron’s Avatar back in 2009. She played the Na’vi princess warrior Neytiri, but for Guardians of the Galaxy, Saldana will exchange Neytiri’s blue skin for green.

Kevin Feige also revealed a few plot details from the upcoming cosmic superhero team-up movie, including a young Peter Quill’s first encounter with extraterrestrials, before he is taken on his space journey to become Star-Lord. Guardians of the Galaxy will also take place within Marvel continuity, but take place on the other side of the galaxy. Check out the concept art for Peter Quill’s alien encounter below: Zoe Saldana will join Chris Pratt as Star-Lord and Dave Bautista as Drax the Destroyer. This leaves only two more key roles to be filled in Guardians of the Galaxy: Rocket Raccoon and the treelike alien Groot. Michael Rooker, Ophelia Lovibond, and Lee Pace will also be featured in the film. Production of Guardians will start this June in England, for director James Gunn. 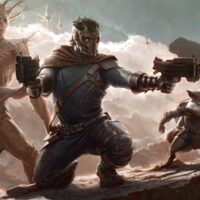 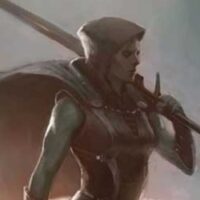 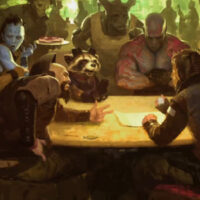