Keanu Reeves Joins Yet Another Sci-Fi Thriller, Get The Details Keanu Reeves has been a part of some of the best sci-fi movies of all time, like the Matrix and Bill and Ted franchises, and some of the worst sci-fi movies of all time, like Johnny Mnemonic and the Day the Earth Stood Still remake. Whether you like it or not, the actor is completely embedded in genre projects as of late, and is possibly adding the mindbending thriller, The Panopticon, to his upcoming slate. I adore this kind of movie, so here’s hoping this flick comes together quickly.

Here’s what The Panopticon is all about. Reeves, who is currently in talks according to TheWrap, will play a normal guy who gets an extremely strange package at his door. It contains a message that warns the world is going to end and that he is the only person out there who can save it. Whose voice is on the message? His.

From that point, the main character must use any clues he can find to put this puzzle together before time runs out and the world comes to an end. There’s no telling at this point whether the threat is a natural phenomenon or if it’s human in nature. Either way it goes, I’m pretty sure Reeves can either punch it or put a bullet in it with the greatest of ease. Unless, of course, this ends up being like Richard Kelly’s ridiculously far-fetched The Box. In that case, we’re all boned. The Panopticon, which comes from studio Good Universe, will be the next feature for visionary director Tarsem Singh—or just Tarsem if you will—who was also responsible for The Cell, The Fall, and Immortals, as well as Mirror Mirror and the upcoming sci-fi thriller Selfless. (So we can expect this flick to be pretty, if nothing else.) Craig Rosenberg, most recently responsible for co-writing the British horror The Quiet Ones and Takashi Shimizu’s long-delayed supernatural airplane horror 7500, handled the scripting duties.

Reeves, who is currently receiving some of the greatest praise in his career for the action-packed John Wick, is currently filming Gee Malik Linton’s non-genre drama Daughter of God, but he’s got several sci-fi projects lined up. He’ll star in Brian Kirk’s spacey love story Passengers, and he’s also set to team up with blockbuster director Roland Emmerich for the futuristic virtual reality thriller New Angels. He’s also attached to the thriller Replicas, which will involve him trying to figure out a way to scientifically bring his dead family back.

Do you guys want more Keanu Reeves in your sci-fi or less? 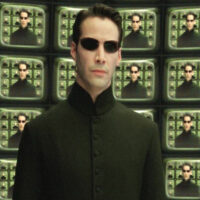