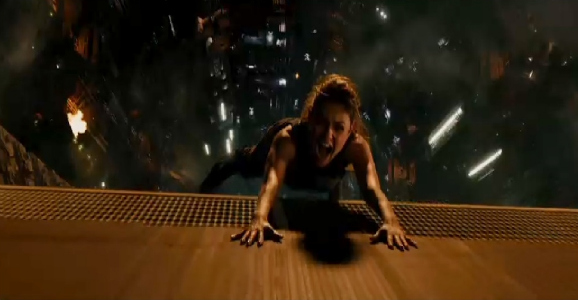 The Wachowskis are great visual artists! Since the release of The Matrix in 1999, almost every film from the Wachowskis has become an event with a very strong must-see factor. While the siblings haven’t hit the same heights since The Matrix, their films have gotten increasingly ambitious. Following up the multi-layered Cloud Atlas, the Wachowskis are returning to their pure science fiction roots with next year’s Jupiter Ascending. Now audiences can experience Jupiter Ascending one week earlier because Warner Bros. has moved it from July 25, 2014 to a July 18 release date.

Originally, Dawn of the Planet of the Apes held the July 18 release date, but that film recently moved up by one week to July 11. Dawn took over the release date formerly held by Fast & Furious 7, which still hasn’t been officially moved, but its production has been put on hiatus after the untimely and tragic death of star Paul Walker.

Before the move, Jupiter Ascending was set to open against Hercules: The Thracian Wars, directed by Brett Ratner and starring Dwayne “The Rock” Johnson. The Wachowskis’ new sci-fi movie was also going to open one week before Marvel’s Guardians of the Galaxy, and it remains to be seen if that cosmic comic book movie will be as big of a hit as the other movies in the Marvel Cinematic Universe such as Iron Man 3 and Thor: The Dark World. Now Jupiter Ascending will face off against Disney’s Planes: Fire and Rescue, a sequel to the Mouse House’s 2013 sleeper hit Planes. Of course, the Wachowskis’ film will open one week after Dawn of the Planet of the Apes and two weeks after Transformers: Age of Extinction, which opens on June 27, 2014.

While Jupiter Ascending moved its release date in the hopes of a bigger box office take, it’s unclear if that will actually happen. Disney’s Planes was a big hit and its sequel will most likely follow suit. Aside from How to Train Your Dragon 2, Planes: Fire and Rescue is the only other animated film opening during summer 2014, so there’s going to be a greater demand for animation for children and families. Jupiter Ascending is the Wachowskis’ follow-up to Cloud Atlas, which was a box office bomb in 2012. It shows that the “From the directors of the Matrix Trilogy” tag doesn’t go as far with general audiences as it used to.

Jupiter Ascending follows Jupiter Jones, a woman destined for great things, but suffering from an endless run of bad breaks. Only when she meets Caine, a genetically engineered alien hunter, does Jupiter begin to glimpse the fate that has been waiting for her all along. She has a genetic signature that marks her as next in line for an extraordinary inheritance that could alter the balance of the cosmos.