Channing Tatum's wolfboy is on the prowl. 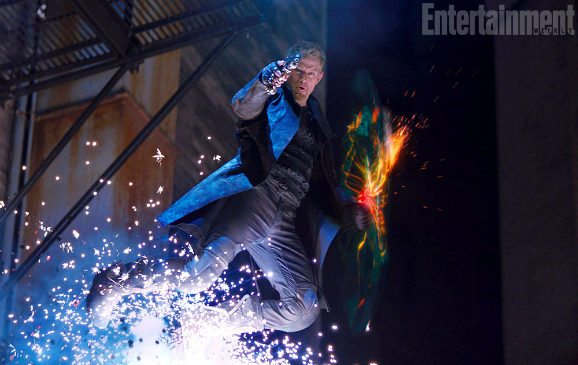 About a month ago, Warner Bros. released the first trailer for the Wachowskis’ new science fiction/action flick Jupiter Ascending. The trailer showcased Andy and Lana’s signature visual style, while hinting at the film’s deeper themes. Now that Jupiter Ascending is on our must-see list for 2014, Warner Bros. has released the film’s first official image, featuring actor Channing Tatum as Caine.

Jupiter Ascending marks the Wachowskis’ follow-up to their 2012 film Cloud Atlas. Although that film was a gigantic box office bomb, it gained critical acclaim and attention from genre fans everywhere. The new image (via Entertainment Weekly) shows Tatum’s Caine, a genetically engineered ex-military hunter. He is a defective genetic splice, a half-albino and with both wolf and human DNA. Caine looks badass as he leaps in the air, a gun in one hand and a strange energy shield in the other. His long black trench coat is reminiscent of Neo and Morpheus’ look from The Matrix trilogy.

After the box office disaster of Cloud Atlas in 2012 and Speed Racer in 2008, the Wachowskis’ need a hit film to sustain some credibility as science fiction visionaries. Andy and Lana Wachowski can only leech off of The Matrix name for so long before studios and audiences dismiss the siblings as tedious and heavy-handed hacks. Honestly, the Wachowskis’ last commercial and critical success was the original Matrix released back in 1999, so it’s no surprise that the siblings are trying to re-capture that magic with another high-concept science fiction movie about an ordinary person discovering they are the chosen one, just like in The Matrix. Jupiter Ascending is the Wachowskis’ best chance for redemption in Hollywood.

Warner Bros. recently moved Jupiter Ascending‘s release date up from July 25 to July 18. That move was made after Twentieth Century Fox moved Dawn of the Planet of the Apes‘ release from July 18 to July 11. Dawn left the July 18 weekend vacant after Universal pushed the release of Fast & Furious 7 from July 11 to April 10, 2015, after the tragic death of one of franchise star Paul Walker. Now Jupiter Ascending has some breathing room from two big summer movies Transformers: Age of Extinction on June 27 and Marvel’s Guardians of the Galaxy on August 1 nipping at its heels. Now Jupiter Ascending will face off against Disney’s Planes: Fire and Rescue for summer box office gold.

Jupiter Ascending follows Jupiter Jones, a woman destined for great things, but who suffers from an endless run of bad breaks. Only when she meets Caine, a genetically engineered alien hunter, does Jupiter begin to glimpse the fate that has been waiting for her all along. She has a genetic signature that marks her as next in line for an extraordinary inheritance as Queen of the Universe, whichcould alter the balance of the cosmos.

Jupiter Ascending will now hit theaters everywhere on July 18, 2014, in 3D and IMAX.