Jupiter Ascending: So What The Hell Was Going On In That Trailer Anyway?

We're here to fill in the gaps between all the pretty.

We’re currently still a little agog after the premiere of the first trailer for the Wachowskis’ upcoming sci-fi epic Jupiter Ascending. It featured Mila Kunis riding a tractor beam into a spaceship, Channing Tatum kicking ass while wearing Vulcan ears, Sean Bean being coolly badass without really trying, and the Wachowskis serving up the sort of gorgeous visuals they’ve made one of their trademarks over the years. And while the trailer was very good at making us want to see more, it wasn’t very good at actually explaining what the hell is going on during it. But don’t worry, we’ve got your back and we’ve got the answers to those lingering questions. 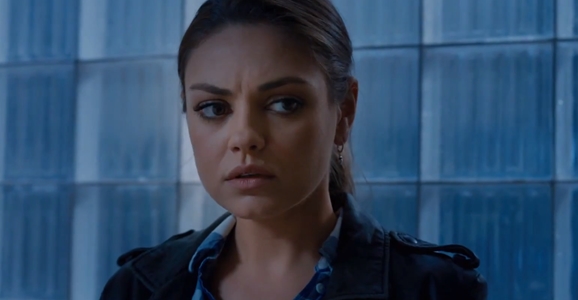 Why Is Everybody Trying to Kill Mila Kunis?
The fact that people want Mila Kunis’ Jupiter Jones dead is one of the few things that is clear in the trailer. And given the space ships and ray guns, it’s obvious that at least a few of those people don’t have a mailing address here on Earth. In fact, it turns out that Jones, a lowly but lovely cleaning lady with chronic bad luck, has enemies in places higher than she knew existed. How bad is the news? The no-shit Queen of the Universe wants her dead. Yikes.

So what’s the so-called Queen of the Universe’s problem, anyway? Does she just have a really high standard for toilet-cleaning that Jupiter Jones can’t possibly measure up to? No, it turns out Jones’ offenses have more to do with those movie-star good looks of hers. You see, she shares the exact same genetic signature as the Queen, a fact that the official synopsis says “marks her as next in line for an extraordinary inheritance that could alter the balance of the cosmos.” It’s not clear exactly what that means, but suffice it to say, she’s a threat to the Queen, or at least the Queen perceives her as one. So you know the score: off with her head.

A queen threatened by a lovely young rival orders the girl’s death — if you’re getting a Snow White vibe, it means you’re paying attention.