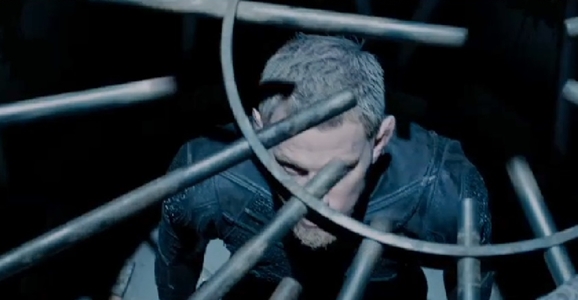 The first trailer for the Wachowskis’ next film, Jupiter Ascending, hit last night, and it’s a doozy. The semi-bonkers space opera has Channing Tatum being badass while sporting goofy elf ears, Mila Kunis as a genetically perfect female, and tons of the gorgeous production design we’ve come to expect from the folks behind the Matrix movies. With a bonkers storyline involving human/animal hybrids and Kunis pissing off the Queen of the Universe, there’s no telling whether Jupiter Ascending will win over movie audiences enough to spawn the trilogy the Wachowskis are hoping for, but damn you have to admire the pair for never doing anything halfway. Good or bad, a Wachowskis movie is anything but forgettable.

There was a lot to see in the trailer, much of it blasting by in the blink of an eye, so we’ve pored back over the video to capture some of the moments and visuals you might have missed. We’ll highlight a few important ones below, and then you can check out the full gallery at the bottom. And if you want more details, check out our full guide to just what the hell is going on in this trailer anyway. Jupiter Ascending will hit theaters on July 25, 2014.

And here she is floating above a hospital bed. Those medical professionals aren’t terribly professional, since the doctor’s diagnosis is “Kill her.”

Channing Tatum plays Caine, a half-human, half-wolf hybrid (hence the pointy ears, we guess) who is sent to snuff Jupiter, but instead falls in love with her and becomes her protector. To be fair, it’s Mila Kunis, so we’d probably do the same thing.

And you thought our orbit was cluttered…

Sean Bean plays a “Han Solo type” named Stinger. Based on the trailer, he seems to be a former mentor or commander of Caine’s. He will almost certainly die.

It’s hard to make out in the trailer, but Caine is fighting some sort of acrobatic Gollum-looking critter in this scene.

Hail to the Queen, she’s the Queen and she needs hailing.

Caine’s got what looks to be some sort of snazzy energy shield that he busts out when it’s time for action.

Eddie Redmayne (Les Miserables) plays an unnamed character, seen here informing Jupiter that some lives will always be more important than others. (We’re guessing Jupiter is on the unlucky side of that equation, as compared to the Queen of the Whole Damn Universe.)

Here Caine is fighting some sort of a bat/gargoyle critter.

That last step is a doozy.