Joss Whedon Plays Down Chances Of A Firefly Kickstarter Campaign

Earlier this week, Veronica Mars creator Rob Thomas launched a Kickstarter campaign to fund a movie version of that cult-favorite canceled show, and he received over $2 million in pledges in less than 24 hours. Naturally, many wondered if other beloved, short-lived TV series could match that kind of success. Enter Joss Whedon. Although Firefly already received a film adaptation in 2005 with Serenity, Browncoats would love to see a new sequel or some other form of resurrection for the Firefly ‘verse. Could Serenity 2 follow in the footsteps of Veronica Mars?

In an interview with BuzzFeed, Joss Whedon opened up about the chances of a Firefly Kickstarter. Whedon says he has no plans to pursue a Kickstarter campaign to fund a Serenity sequel. If nothing else, his work with Marvel Studios’ Phase 2, The Avengers 2, and the upcoming S.H.I.E.L.D. TV series for ABC are keeping the 48-year-old geek icon busy these days. Whedon says:

‘I’ve said repeatedly that I would love to make another movie with these guys, and that remains the case. It also remains the case that I’m booked up by Marvel for the next three years, and that I haven’t even been able to get Dr. Horrible 2 off the ground because of that.’ To put it bluntly: ‘I don’t even entertain the notion of entertaining the notion of doing this, and won’t.’

But don’t get too sad about this, Joss Whedon left the Serenity 2 door open a little bit when he added, “Couple years from now, when Nathan [Fillion]’s no longer [on] Castle and I’m no longer the Tom Hagen of the Marvel Universe and making a giant movie, we might look and see where the market is then.”

So keep hope alive, Browncoats. Once Joss Whedon is finished with Marvel, he’ll be free to explore his options elsewhere and possibly get some projects off the ground like Dr. Horrible 2 and Serenity 2. 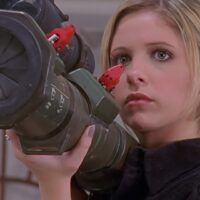