Josh Brolin Teases Thanos’ Next Appearance And His Love Of Death Mild SPOILERS if you haven’t seen Guardians of the Galaxy yet, but judging by the more than $225 million worldwide box office take, there aren’t that many of you still left.

Practically nonstop since the post-credits scene in The Avengers—and no, I don’t mean the shawarma scene—we’ve heard that Thanos, also known as The Mad Titan, will play a big role in the Marvel Cinematic Universe moving forward, especially as the action pushes deeper and deeper into deep space. The big bad will be played by Sin City‘s Josh Brolin from now on, and we saw him for a bit in Guardians of the Galaxy, though in a more removed role. We’re left to wonder when we’ll see him again, and piggybacking on that appearance, Brolin has already started dropping hints.

Marvel already has what appears to be a concrete plan through at least 2019. We may not know all of the specifics and details yet, but they definitely have a roadmap they’re following. IGN caught up with Brolin and asked him about his role in that future. As it turns out, though he has an idea of where things are headed, he’s only somewhat more knowledgeable than we are. He says, “I know what one appearance is going to be for sure. There’s one or two that I don’t know.”

We’ve been told repeatedly that Thanos will not appear in Avengers: Age of Ultron, but the playing field for Avengers 3 and Guardians of the Galaxy 2, which is already scheduled for July 28, 2017, is wide open. He’ll for sure be in at least one of those movies, if not both—odds are they’ll be linked in some way—and maybe some more for good measure. When he first got the role, the studio sent him all kinds of comics for research (sounds tough), which took up a large chunk of his time. He says, “When I first said yes, they sent me so much frickin’ research. I was in the middle of doing Everest, and I was focusing more on Thanos than I was on Everest. But it’s an exciting prospect, truly.”

Over the course of his reading and learning, he’s invariably come across some story arcs and aspects of the character he most identifies with, and one should make bit looming villain that much more accessible and available to fans as well. Brolin says:

His relationship with Death, who is actually the woman, I love that. You can take Sin City [in which Brolin plays a man obsessed with a dark-hearted woman] and pump it full of steroids, and then you have Thanos. I like that he’s motivated by that—not just motivated by destruction or death or this or that. He’s motivated by a very identifiable, human trait.

It would be interesting to see one of the most sinister villains in the midst of a teenage-style crush, especially with Death herself. That relationship would have some pretty big issues to contend with, and certainly give fans something to cling onto, but what they really need to do is do some work establishing Thanos as a character and a threat. He’s shown up twice in the MCU to this point, and while he seems scary on the surface, all he’s done is talk in a scary sounding voice, loan out his adopted daughters (Zoe Saldana’s Gamora and Karen Gillan’s Nebula), and not blow up a planet for Ronan (Lee Pace). We know we’re supposed to be afraid of him, but going just on the movies, up to this point we really have no reason to be. Hopefully that will all change sooner rather than later. 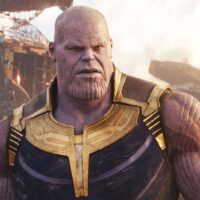