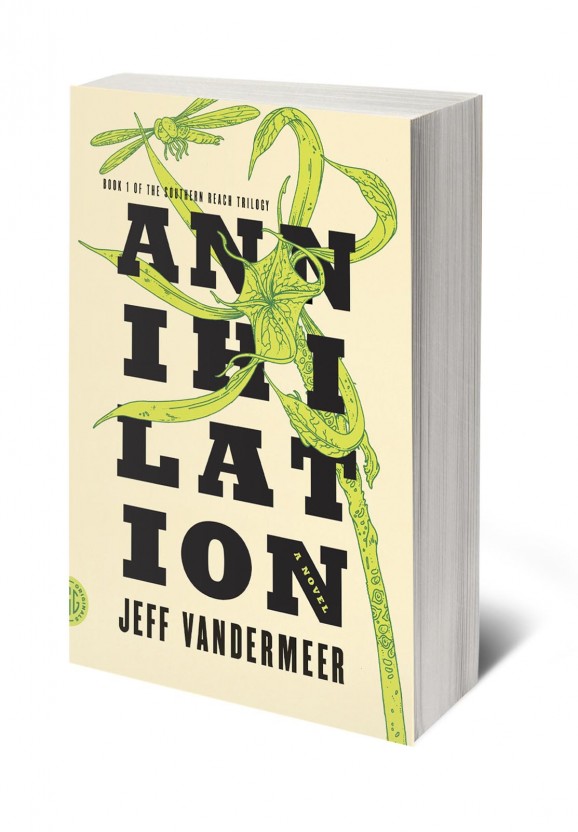 I’m counting down the days until Acceptance, Jeff Vandermeer’s third and final installment of the Southern Reach Trilogy, gets released. After realizing that there are 13 people ahead of me in the queue to reserve at at the public library, I just bought it on my Kindle, where it will be delivered in just five days. I’m so psyched for Acceptance because of the series’ first book, Annihilation, and despite the series’ second, Authority.

I found the sequel to be quite slow compared to the first — at least, up until the very end — largely because it hinged on a protagonist I never ended up caring much about and some of the events seemed a little over the top, more ridiculous than scary. But Annihilation is so powerfully creepy in all the right ways that, despite my disappointment in the sequel, I’ll soon drop off the face of the Earth for however long it takes me to finish the final book. If it’s anything like Annihilation, which is like crack on the page, it won’t take very long.

Some books start off slowly, dipping the reader’s toe in water rather than pushing them into the pool. Annihilation isn’t one of those. Five minutes in — or perhaps it was more like two — I was completely immersed. It’s less of a pool and more like quicksand. I didn’t struggle to get out, but I felt as though I couldn’t have risen to the surface if I’d wanted to. I read 75% of it on a plane and the rest immediately upon arriving at the place I was staying. Forget looking around, checking out the digs. I had more important things to do.

The basic premise sounds like something from the X-Files: there’s been some kind of “event” in a region of the U.S. southern coast. The government calls it an environmental disaster and has placed the area under quarantine, but it’s clear there’s much more to it. Both the title of the book and the shroud of secrecy and bureaucratic nonsense suggest that something extraterrestrial may have happened (or more likely, is still happening) there, but what do you know — the government won’t confirm anything and is generally just a royal pain in the ass. Instead, it has established the Southern Reach, a secret agency that monitors the area and enforces its border.

While civilians aren’t allowed anywhere near the border, ever since it became possible to cross the border (this is a bit hazy, but for a while it was actually impossible to reach Area X, and now crossing the border is a harrowing transcendence into another world, and one that scares off plenty of would-be explorers), the Southern Reach has been forming expeditions to investigate and map the area. Annihilation focuses on one such expedition — officially the 12th, with some fuzzy counting.

The expedition is comprised of five women — a biologist, a linguist, an anthropologist, a psychologist, and a surveyor. The linguist begs off before they even arrive, and then people start disappearing — or worse. Soon, the biologist is really all that’s left, and she makes for a compelling and unusual protagonist. She’s strangely at home in Area X and fascinated by ecosystems the likes of which she’s never seen before. I won’t tell you what she finds, but suffice it to say there’s some seriously weird and creepy stuff — part horror movie, part weird science.

As she’s exploring, Vandermeer interjects flashbacks that help build an even more ominous atmosphere. The biologist (we never do learn her actual name) used to be married to a member of the 11th expedition, who returned from his journey completely and utterly changed both emotionally and physically. The biologist is searching for answers not just about Area X, but about her husband as well, and about the other previous expeditions that the Southern Reach hasn’t been forthcoming or honest about. Readers also get the sense that the Southern Reach has somehow sabotaged all of these missions, including the present one — there’s something off about their maps, their equipment, their preparation, and their information. But what is it, exactly? And why?

That’s how the madness of the world tries to colonize you: from the outside in, forcing you to live in its reality.

I don’t think I’ve ever read a book so thoroughly imbued with the feeling that things just aren’t right. Childhood’s End perhaps comes closest, but in that book readers know on an intellectual level that things aren’t right. In Annihilation, readers feel it in their guts, which is even spookier. Vandermeer crafts this masterfully (as well he should, given that he wrote Wonderbook, a visual guide to writing imaginative fiction), and keeps the readers teetering right on the edge — he raises many questions, but not too many unanswerable ones, and he provides some answers, but not quite enough. There’s clearly something not human working its mojo in Area X, and the biologist’s ability to navigate the area, as well as a close encounter with some strange spores, suggests that perhaps she’s not quite human either. But she’s pretty chill about it. She doesn’t “require any of this to have a deeper meaning.” Her objectivity is both what saves her and what damns her.

I have no idea what Vandermeer has planned for the third installment, but whatever it is, the biologist lies at the heart of it. I suspect the protagonist of Authority does too. But the real protagonist seems to be Area X itself, which Vandermeer enlivens to the point that I swear I could hear it breathing as I read. It seems impossible to contain Area X, no matter how hard the Southern Reach tries. Area X is on the move, flickering with lights and reeking of otherworldly musk, encroaching on the rest of the world. And Vandermeer has sucked me in so deep that I can’t help but cheer it on.

We can’t get enough of the Southern Reach here at GFR. You can read Nick’s thoughts on the series right here.