Beginning with Jon Favreau on Iron Man, Marvel has made some really smart choices about who they hire to helm their Cinematic Universe superhero movies. Joe Johnston was pretty much born to direct the first Captain America movie. Shane Black helped make Iron Man 3 a worldwide mega-hit, raking in $1.2 billion. And Joss Whedon did the once-thought-impossible and actually delivered the Avengers movie fans had been dreaming about for decades. Now James Gunn and the Guardians of the Galaxy are poised to rocket into theaters, and Gunn has revealed that Whedon himself went to bat to help the Slither director land the job. But that apparently wasn’t Whedon’s only contribution to Guardians.

Gunn apparently first met with Marvel reps in July 2011, where they showed off concept art and pitched him on the project. Gunn wasn’t initially sold on the idea of directing Guardians, but can you blame him? When it was first announced it felt like anything but a sure thing, since it involves an obscure Marvel property and, as far as we know, no appearances by any of the more familiar Marvel characters to serve as an entry point for audiences. But the more Gunn thought about it, the more he began to imagine what his Guardians movie would look like, and the more he wanted the job. So he eventually emailed his friend Joss to ask for help. Gunn told our sister site CinemaBlend, “I wrote him an e-mail and said, ‘Hey, you know I’m trying to get this job. Can you help me?’ And he said, ‘You’re f***ing late. I already talked to all of them guys about you.’”

Whedon has of course been busy with his own corner of the Marvel Universe, working on the Avengers sequel Age of Ultron. But he still had time to help his friend make the best Guardians movie possible. Guardians of the Galaxy producer Jonathan Schwartz told CB:

Joss was involved with a little bit of the writing process. He and James go way back and have a great relationship, and everything we do is kind of crafting the same tapestry that is the [Marvel Cinematic] Universe. So Joss and James got to work together putting this together. It’s James’ script, but Joss was able to be involved in a really useful way.

Of course, along with Marvel Studios president Kevin Feige, Whedon is one of the primary people shaping the future of the Marvel Cinematic Universe, so it’s not surprising at all that he pitched in behind the scenes on Guardians, especially given his friendship with Gunn. But Whedon’s most important contribution to the Marvel space opera may have been his encouraging Gunn to trust his instincts and truly put his stamp on the Guardians movie. Gunn says that D’Esposito and Feige were pleased with Gunn’s first draft of the script, but Whedon thought something was missing. Gunn told CinemaBlend:

Joss was happy, but he wasn’t as happy as everybody else and I was like, ‘Whoa man!’ and he’s like, ‘Well, I really loved this and this is great, and the story’s been cracked, but you know I just really want there to be more James Gunn in the script. There’s things that are too conventional and I want more James Gunn in it.’ … I was like, ‘All right, your funeral.’ Then went home and I swear to God, I wrote a seven-page scene where the guys are in the spaceship arguing about something and it’s all dialogue and we’re about to shoot it on Friday.

Based on what we’ve seen of Guardians of the Galaxy so far, James Gunn was very much the right man for the job, and we can only hope Marvel will keep taking chances on talented people who maybe aren’t the obvious, easy choice for their future properties. And as for me personally, I’m hoping Guardians will make a billion dollars and launch a multi-picture franchise, because I’d love to keep returning to the cosmic side of the Marvel Universe again and again in the years to come.

Guardians of the Galaxy opens on August 1. 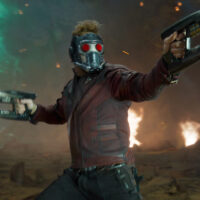