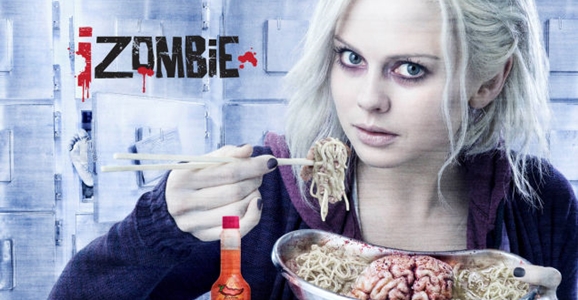 DC Comics is making some major inroads on the small screen this year, with Gotham and Constantine headed to Fox and NBC, respectively, and The Flash spinning off of The CW’s hit series Arrow. But there’s a little sibling from the group that tends to get overshadowed by those three: The CW’s iZombie, based on the Vertigo comic book series created by writer Chris Roberson and artist Michael Allred. And it shouldn’t be relegated to second-fiddle status since the comic it’s based on is good fun, and the guy running the show was responsible for the outstanding cult hit Veronica Mars. True to form, the show managed to fly under the radar during our coverage of the recent San Diego Comic-Con, but thankfully we’ve stumbled across a Con interview with Thomas where he tosses out comparisons to Buffy the Vampire Slayer. Alright, sir, you have my attention…

iZombie is the story of Liv Moore, an ordinary lady who gets bit by a zombie and is thus doomed to hunger for human brains. Thankfully, she uses her own to figure out a sustainable source for her new craving: she takes a job in a morgue. So long as she keeps downing grey matter on the regs, she can continue to pass for a living human, so that’s nice. Unfortunately, her new diet takes an unexpected twist when she begins to inherit the memories and traits of the people whose brains she’s eating, leading her to begin trying to solve their murders.

Speaking to io9, showrunner Rob Thomas revealed that iZombie wasn’t his first stab at a zombie show. He’d actually developed one several years back and was ready to pitch it…and then Variety announced AMC’s pickup of The Walking Dead. “What they did was so similar to what we were doing, it just killed that project,” said Thomas. “So, I put zombies on the back burner for several years.” Cut to a few years later, when the head of Warner Bros. development approached Thomas about adapting iZombie, hoping to spawn a strong female-led show for The CW. Despite being intrigued, Thomas was busy editing the Veronica Mars movie and working on a couple of other pilots, so he initially turned the offer down. Warners was persistent, however, and kept after him to lend them his braaiiiiinnns. Eventually he agreed to write the pilot with Diane Ruggiero (Veronica Mars, Bates Motel).

Back when Veronica Mars was building a die-hard audience of fans, there were plenty who compared that show to Joss Whedon’s Buffy, but Thomas says iZombie is much closer in tone to Whedon’s Slayer show than Veronica Mars ever was. He told io9:

Veronica was very real world. There were no monsters in it. There was not a lot of action or violence in it. iZombie will have a bit more of that. Veronica Mars, we were really serious about trying to write great mysteries and spending a lot of our beats and story points on that. I think on iZombie, we’re going to spend a little more time trying to get to fun zombie moments. We don’t want it just to be a ‘zombie solves a murder case,’ each week. We want there to be a real, zombie mythology and zombie story lines. I would say in Veronica Mars there was always a big murder case that encompassed the season. In iZombie, there’s a big zombie storyline that will sort of serve as the same role.

Thomas also said that the mechanics of how zombie-ism works in the show will provide other storytelling opportunities than just solving crimes. For instance, the fact that eating a brain not only passes that brain’s memories on to Liv, but also some of the traits of the person it belonged to. Here’s Thomas’ explanation of how it all works:

So in week three [Liv] eats the brain of a sociopathic, and she becomes a bit sociopathic. In the same episode she also eats the brain of a trivia champion and suddenly sounds like Cliff Clavin over the course of the episode. Generally, she’ll get one kind of good trait and one difficult trait each episode. If they stop eating, they quit functioning and they start turning into the more prototypical slow-moving, dumb-witted zombies. And we kind of have everything they sort of start at functioning then kind of slink back into more World War Z, and if they keep eating they become slow moving and we call those ‘The Romeros.’

iZombie is slated for a midseason premiere on The CW.