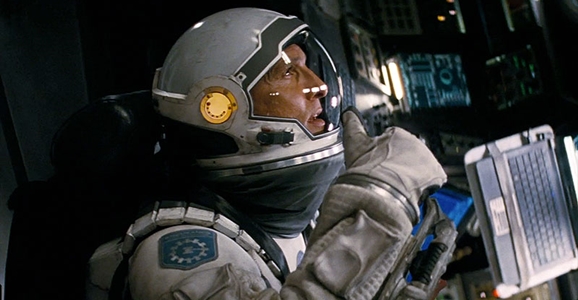 Christopher Nolan’s Interstellar was perhaps our most anticipated movie of 2014. Now that it’s come and gone and sharply divided audiences, the next truly massive science fiction to take up the “most anticipated” mantle has got to be Star Wars: The Force Awakens. After all, it’s the first new Star Wars film since 2005’s Revenge of the Sith, it’s the first where the buck doesn’t stop with George Lucas, and it’s the first stage of Disney’s massive and ambitious plans for the franchise. Needless to say, all eyes are on The Force Awakens…and two of those eyes belong to Christopher Nolan, who recently discussed his love of Star Wars in a new interview, as well as answering whether he would be up for directing a Star Wars movie of his own at some point.

Speaking to The Daily Beast, Nolan recalled seeing Star Wars in theaters at the age of seven, and how transformative that experience was, with the screen “opening up, sucking you in, and taking you to a different galaxy.” That, combined with getting to see 2001: A Space Odyssey on a massive screen with his father, helped set Nolan on a path that eventually led him to make his own space epic. Nolan said:

I was in awe of the scale of it, the escapist possibilities of it, and the sense of adventure and ability to take the audience across the universe. It definitely stuck in the back of my mind that if I were ever given the chance to give an audience of today that experience, I’d have to try and do that.

Given that Nolan is one of the most respected and successful directors in the movie business at the moment, his name was one of many suggested when people were speculating about who would direct Episode VII. That job eventually went to J.J. Abrams, fresh off helping revitalize the Star Trek franchise (whether you like his take on Gene Roddenberry’s franchise or not, there’s no question Abrams’ Trek films put that universe back in the public eye in a way it hadn’t been in years).

So while it doesn’t look like Nolan will be helming a Star Wars movie anytime soon, does that mean the possibility is entirely off the table? Nolan told The Daily Beast:

I’m pretty excited to see what J.J. is going to do with that. I’m excited to see that he’s shooting on film and actually built the Millennium Falcon. As far as whether or not I would have ever done it, the truth is I think I’d be afraid to touch it! He’s boldly going where he went before in Star Trek, and it takes colossal balls. I’m a lot more comfortable trying to do my own thing than carrying the weight and expectation of the entire world — particularly 40-somethings like me who live and die with each new bit of information about Star Wars. But I’m very excited to see what he does.

It’s not terribly surprising. Nolan has already played in one massive pop culture sandbox thanks to his Dark Knight films (and, to a lesser extent, Man of Steel, which he executive produced but did not direct). But for the most part Nolan has always been focused on telling original stories, and given that the results include Inception, Memento, and The Prestige, I’m okay with that. Especially since he’s one of the only directors powerful enough to get original projects greenlit with the sort of huge tentpole budget that something like Interstellar requires.

So, if we’re probably not going to see a Nolan Star Wars film anytime soon, what about one featuring Nolan’s (inter)stellar leading man? Speaking to IGN, McConaughey says he’d definitely be open to appearing in a Star Wars movie, but not just because it’s a Star Wars movie. He told IGN:

Sure — there’s not anything that I’m not open to embracing. I want it to be a quality script, I want a quality character. I want to be a little scared of it. I want to have new challenges. I want to do something… find in a character where I can get to a point where I feel like nobody could be doing this but me. I’m going to have an original experience… an original take. That takes work to get to that point, but whatever the genre I’m wide open.

Interstellar is currently in theaters. Star Wars: The Force Awakens is set to release on December 18, 2015.