HBO’s horror noir series True Detective may not be, strictly speaking, science fiction (yeah, we know, it’s not sci-fi at all, but bear with us), but that doesn’t mean it isn’t a fantastic show. And though we haven’t seen it yet, Christopher Nolan’s Interstellar also looks like it is going to be fantastic. Both have a somber mood and tone and rural setting (at least part of it), and there’s a connective thread here that is star Matthew McConaughey. This apparently led at least one person to wonder what True Detective would be like in space, and this video, Interstellar Detective, is the result.

One intrepid YouTube user mashed the two together, and surprisingly enough—or maybe not—they match up reasonably well. Laying the sound from True Detective over the most recent Interstellar trailer proves to be a pretty good fit. The two are thematically similar, sharing concerns over the state of mankind and the world at large, and envisioning a future, both possibly full of death and chaos.

That’s also where they differ, however. Where one (guess which) looks out into the world and sees darkness and horror, and delivers an overall pessimistic stance on the matter at hand, the other takes a different approach. Interstellar is set in the near future, where climate change wreaks havoc across the globe—as you can see in this footage, there is new dust bowl thing going on—the future of the human race is in greater jeopardy that it ever has been before. If we don’t find a solution, we’re screwed six ways from Sunday, maybe more.

An opportunity presents itself in the form of a wormhole, a theoretical portal between distant regions of space. A team comprised of McConaughey and Anne Hathaway, and probably some others, must leave behind everything they hold dear, travel through this gateway into the unknown, searching for a new place for humanity to call home.

There’s no pressure or anything, but as high as the stakes are, and despite huge odds of failure, death, and being stranded light years away from home, there is hope. They’re not dwelling on the negative, sitting back, waiting for it all to come to an end, and tearing themselves apart, they’re very literally reaching for the stars and dreaming. Compared to the bleak, dystopian, post-apocalyptic path so many recent sci-fi movies take (don’t get us wrong, we love those, too, but they can be oppressive and overwhelming at times), this looks to be a welcome change. 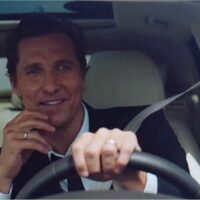