Harrison Ford Shares Behind The Scenes Insight From Star Wars

Harrison Ford has had a long, storied career. He’s played the president who kicks people off his airplane, used a bullwhip in new and inventive ways, and traveled to a galaxy far, far away. Given that production has just started on Star Wars: Episode VII, and many of us assume Ford will reprise his iconic role as Han Solo one more time, it’s that bit many people are most interested at the moment. Over the weekend the 72-year old actor participated in a Reddit Ask Me Anything session, and, as you can imagine, people asked him about his time as a scruffy-looking Nerf Herder.

Ford didn’t drop any new details about Episode VII, which shouldn’t be a surprise to anyone at this point. Though the secrecy may be entirely pointless, that doesn’t that director J.J. Abrams, Disney, Lucasfilm, or anyone involved are going to loosen up anytime soon. He did, however, tells some fun, interesting behind the scenes stories form his time working with George Lucas and company.

It may surprise people that Ford wasn’t initially up for any role in Star Wars. Instead he was more focused on doing some remodeling work at home and only took a job helping Lucas cast other roles. Later, and quite unexpectedly, he was, of course, offered a very different job. He says:

I was quite surprised when I was offered the part. My principle job at the time was carpentry, I had been under contract as an actor at Columbia and Universal. I had a house at the time I wanted to remodel, a bit of the wreck of a house. I’d invest money in tools but wouldn’t have money for materials, so I realized this was another way of putting food on the table.

That moment in The Empire Strikes Back, when Carrie Fisher’s Princes Leia tells Han, “I love you,” and he responds, “I know,” perfectly encapsulates Han’s personality, a charming rogue to the end. Over the years it has widely been regarded as a line that Ford improvised. As with many legends, however, that’s not exactly the case. The line did come from Ford, but it was not so spur of the moment; he suggested it in rehearsals. He says, “I thought it was more of a character line than what was written.”

And now to the moment that has haunted Star Wars fans ever since George Lucas decided to go back and tinker with the beloved franchise. In A New Hope, did Greedo in fact shoot first? In the original version, Han shoots the green bounty hunter before he can do anything about it. In the update, Greedo draws, fires, and Han acts in what amounts to self-defense. This is touchy subject among fans, and I’ve always been of the mindset that the original way—the real way, as I think about it—is the how it should be. It is another character defining moment. In that one action, that split second, you immediately learn a great deal about Han. It sets up his personality, his persona, how he sees himself, and where his journey begins. You get a lot of work out of one round from a blaster.

Like I said, this is a huge deal for fans. Ford, however, apparently doesn’t give a shit. He says, “I don’t know and I don’t care.” Maybe I’m reading too much into one moment. 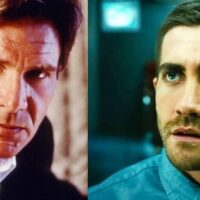