Guardians Of The Galaxy: Watch Chris Pratt Dance In These Two Blu-Ray Extras

Marvel’s mega hit Guardians of the Galaxy is still bouncing around theaters, delighting audiences all over the globe with its swashbuckling action style and sarcastic sense of humor. It’ll still very likely be there by the time the space adventure hits the home video market in a few weeks. Dropping digitally first on November 18, it hits physical media on December 9. Yesterday director James Gunn shared a fun 8-bit rendering of an early sequence of the film that will appear on the Blu-ray, and today we’ve got a glimpse at two more behind the scenes extras from the disc.

The first video is essentially Gunn giving you a guided tour through one of the early scenes, where Chris Pratt’s Peter Quill, aka Star-Lord, dances his way across the planet Morag to the sounds of Norman Greenbaum’s “Spirit in the Sky.” The point of this featurette is to emphasize the role that music and the soundtrack play in Guardians.

As Gunn says, here you have what appears to be a very serious, potentially dangerous scenario. You don’t even know if this figure in a long leather coat is a man or a robot. It’s a foreign, alien environment, but when that song kicks in, you’re immediately reconnected to Earth, not to mention that the tone makes a drastic shift as Quill starts dancing his way through around the planet, air drumming away.

Listening to Pratt talk, you also get a good feel for the massive scope and scale of the production. Having the music on set, knowing what was going to play in a given scene, helped him, as an actor, get into this big, bizarre world on a more human level.

Video number two gives you a glimpse behind the curtain at the climactic scene on Xandar where the heroes face off with the villain, Ronan the Accuser (Lee Pace). And don’t worry about all of that fire, there were firemen on set, so they had that situation well in hand. By this point in the movie everyone is dirty and beat up, but as Pratt says—you get the feeling anytime anyone turned on a camera anywhere on set, he popped up as if by magic—they were also having a blast. And you can see that as they have what he calls a “standard action dance off.” More tentpole action movies need to end with epic dance battles.

There are going to be plenty more extras when the Guardians of the Galaxy Blu-ray hits the open market, but the real reason to pick this up is for the movie. It’s currently the highest grossing movie of 2014 domestically, and the second highest worldwide, but beyond all of that, it’s just so damn much fun. 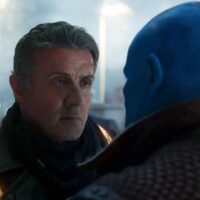 Guardians of the Galaxy Vol. 3: James Gunn Hints We Won’t See It Till 2023

Guardians of the Galaxy Vol. 3: James Gunn Hints We Won’t See It Till 2023