Guardians of the Galaxy seemed like a risky move for Marvel at first. Though the characters play an integral part in many storylines in their expansive comic book universe, it isn’t a title that the general public isn’t particularly familiar with, like X-Men or Spider-Man. That said, everything the studio has done since making this announcement makes this look like it’s going to be one of the most entertaining movies of the year. They’ve now dropped two more character posters, for Star-Lord (Chris Pratt) and Drax the Destroyer (Dave Bautista), in our laps.

These are the latest one-sheets to appear this week at Fandango. Monday gave us a two-fer, with Rocket Raccoon (voiced by Bradley Cooper) and his anthropomorphic alien tree, Groot (Vin Diesel). Yesterday’s poster featured green-skinned assassin Gamora (Zoe Saldana), wearing a wry smile and looking like she’s about to stab the hell out of someone.

Star-Lord, AKA Peter Jason Quill, is the leader of this mismatched gang of outlaws, and in this poster he looks pretty serious, way more serious than he comes off in everything else we’ve seen. Given that the plot involves a stolen orb, which may be one of the Infinity Gems, an intergalactic manhunt, evil alien empire, and the fate of the entire galaxy, there’s definitely some heavy stuff going on. But one of the things we’re most excited for is the sarcastic sense of humor, which gives Guardians an almost Indiana Jones feel.

Between this role, which, because we’re talking about Marvel here, will expand into who knows how many more movies, being the lead in Colin Trevorrow’s Jurassic World, and his work on NBC’s Parks and Recreation, Pratt is going to be a wee bit busy for the foreseeable future. How he’ll find time to do that and still maintain his new washboard abs, we have no idea. We didn’t particularly expect him to become a massive movie star, but he’s more likable and fun than most leading men, so we’re okay with this turn of events. Drax’s poster takes that overused Hollywood approach of showing a character with his back turned towards the audience. At least here there’s a reason for it here, so you can see that expansive network of snazzy red tattoos that sprawls all over his torso. He also looks really angry, like he’s about to spin around and put those big ass knives to work on you just because you’re pissing him off. 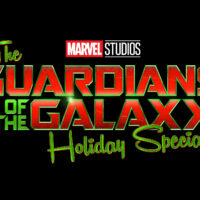