Gravity And Her Receive Nominations For The 86th Academy Awards 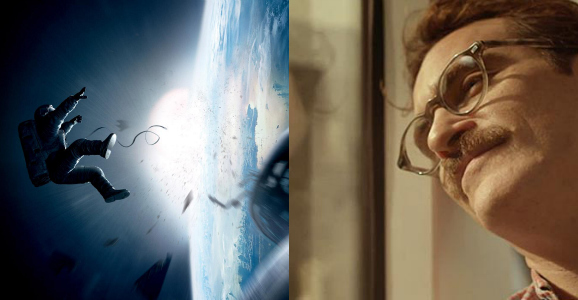 Good news, everyone! The end of awards season is in sight. The Academy of Motion Picture Arts and Sciences has announced the nominations for the 86th Academy Awards. In the past, there were only five slots available for the Best Picture Oscar, but now there could be up to 10 in total. This year there are nine, and two of them fit within the science fiction genre: Alfonso Cuarón’s Gravity and Spike Jonze’s Her.

Gravity was at the top of the Best Picture race even before the film was released. The amount of time director Alfonso Cuarón worked on the space drama led to the idea that he was working on something epic. He had even enlisted the services of James Cameron to help him bring his vision to the big screen. Along with cinematographer Emmanuel Lubezki, who was also nominated for an Academy Award, the trio created new filmmaking technology to make Gravity a reality. The film was nominated for 10 Academy Awards in total, including Best Picture, Best Director for Cuarón, Best Female Actor in a Leading Role for Sandra Bullock, and a whole bunch of technical awards. However, Gravity was not nominated for Best Original Screenplay or Best Live-Action Short Film (for Jonás Cuarón’s tie-in short Aningaaq).

Spike Jonze’s Her received five nominations. Jonze’s satirical science fiction romance flick has pleased audiences and critics alike. While I was not a big fan of the movie, I have to admit that many, many others fell deeply in love with Her. The sci-fi romance was nominated for Best Picture, Best Original Screenplay for Jonze, Best Original Score for Owen Pallett and William Butler (of the band Arcade Fire), Best Production Design, and Best Song for Karen O of Yeah Yeah Yeahs and Spike Jonze’s “The Moon Song.”

Rounding out the Best Picture nominations are 12 Years a Slave, American Hustle, Captain Phillips, Dallas Buyers Club, Nebraska, Philomena (or, as Leonardo DiCaprio calls it, “Philomania”), and The Wolf of Wall Street, with David O. Russell, Alexander Payne, Steve McQueen, and Martin Scorsese all being nominated for Best Director.

American Hustle, which was also nominated for 10 Academy Awards, is currently the front-runner to win the Best Picture Oscar. It looks like it’s going to be a good old-fashioned grudge match between Gravity and American Hustle for Oscar gold. My guess is that Gravity will win all the technical awards, while American Hustle will take home Best Picture. As for Best Director, that’s really up in the air. The nominations are all strong, so it’s going to come down to movie studios and publicists campaigning for the award. The front-runners seem to be Russell, Cuarón, and McQueen, but how could you ever count out Alexander Payne and Martin Scorsese?

Just keep in mind; it really doesn’t matter who wins the Academy Award. All of these movies are really good, so nothing should take away from your personal enjoyment of watching any of them. The nominations are really just a confirmation that 2013 was a very good year in film, and in science fiction. What movies do you think were overlooked or snubbed?

You can read all of the 86th Academy Awards nominations below: