Van art is, in general, an underappreciated mode of creative expression. When most of us think of pictures of airbrushed on the side of a full-ton, the first thing that springs to mind are poorly rendered fantasy-scapes involving wizards, dragons, and some sort of thinly veiled reference to psychedelic drugs. You’ve all seen this sort of van, the kind that’s jacked up in the back, has one window made out of cardboard and duct tape, and that may or may not contain a waterbed. There’s also often times strange smelling smoke pouring out of the windows, as if it were on fire. 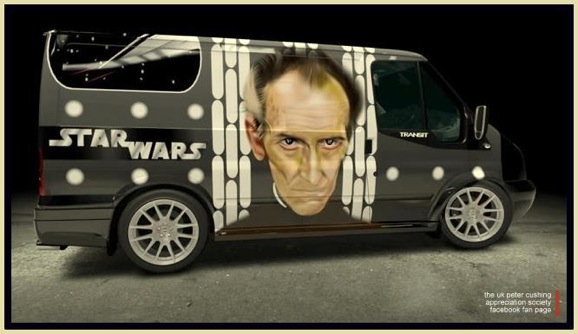 This, however, is something of a different animal. Ridiculous in another way entirely, this cargo van has the likeness of Grand Moff Tarkin, the commander of the first Death Star in Star Wars, painted on the side. Slick and professional, you have to wonder, why the hell they opted for this particular character. When someone goes with a Star Wars motif on their vehicle, it’s usually a crude drawing of the Millennium Falcon, Darth Vader smoking a J, or a janky-ass storm trooper.

Sure, the severe visage of Peter Cushing glowering like that probably scares the hell out of a lot drivers, but Tarkin dies rather unceremoniously when Luke Skywalker and the rebels blow the hell out of the first Death Star. This image does come from the Peter Cushing Appreciation Society, so you can see where they’re coming from.

Regardless of motivation, it’s nice to see that vans, as a medium, haven’t fallen completely out of favor in the artistic community.