Godzilla Toy Gives Us A Better Look At The Big Guy The new Godzilla reboot has generated a lot of excitement over the past few months. Warner Bros. and Legendary Pictures have been pushing Godzilla since last July at San Diego Comic-Con, with the first amazing trailer dropping jaws last month. But we have yet to see one solid image of Godzilla’s entire body. The trailer showed us glimpses, but now a new toy provides the best look yet at Godzilla, at least until Warner Bros. eventually releases an official image of the beast.

The image surfaced on io9 and is from the film’s new toy line. The toy is believed to be the final version of Godzilla’s design from the movie. If that’s the case, Godzilla looks great! The King of Monsters looks closer to the original Godzilla from the 1954 Japanese film. He’s huskier and plumper than the 1998 version from Roland Emmerich’s Godzilla movie, which was sleeker and reminiscent of a Velociraptor from Jurassic Park than the monster we all know and love. This new Godzilla looks fierce and hell-bent on destruction. I like it!

A banner standee featuring the tagline “The World Ends, Godzilla Begins” recently surfaced in Japan, while various clips, TV spots, and movie posters from the film will undoubtedly get fans excited. Warner Bros. also released a new online game featuring Godzilla destroying a cityscape, available to play on the movie’s official website. Warner Bros. and Legendary Pictures also released the official synopsis, which points to the possibility that Godzilla might not only face off against humanity, but against other unknown beasts.

An epic rebirth to Toho’s iconic Godzilla, this spectacular adventure pits the world’s most famous monster against malevolent creatures who, bolstered by humanity’s scientific arrogance, threaten our very existence.

The screenplay for Godzilla has seen its fair share of rewrites from screenwriters such as Max Borenstein, Drew Pearce, David S. Goyer, and David Callaham. Former Walking Dead showrunner Frank Darabont, who revised the final version of the script, called the film a “force of nature.” British filmmaker Gareth Edwards directed the new Godzilla movie, following up on his directorial debut, 2010’s Monsters. While Edwards doesn’t have much experience making big Hollywood blockbusters, he is a very sensible director with a keen eye and sense of drama and story. 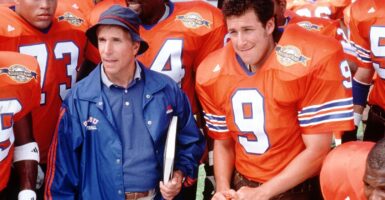