Note: Following the non-specific first paragraph, the rest of the article contains spoilers about last Sunday’s episode of The Walking Dead. If you haven’t watched it yet, what did you click on the link for?

The cast of characters in AMC’s The Walking Dead continues to shrink. It’s both a good and a bad thing. Bad, because without the constant threat of death eventually taking over the characters’ lives, the show really doesn’t have too many exciting moments going on within the inter-character drama. Of course, the prison survivors vs. The Governor and his loyal tribe is now taking shape, so there will at least be revenge driving the emotions in a war that, you guessed it, will threaten everyone’s lives. In any case, there’s nothing else quite like it on TV, and the terrific effects and action sequences make up for the mucked-up dialogue for the most part. This week, Daryl slammed a trunk on a zombie’s head. No spoiler alert. Now we’ll move on to the meat of the story, after a few photos. 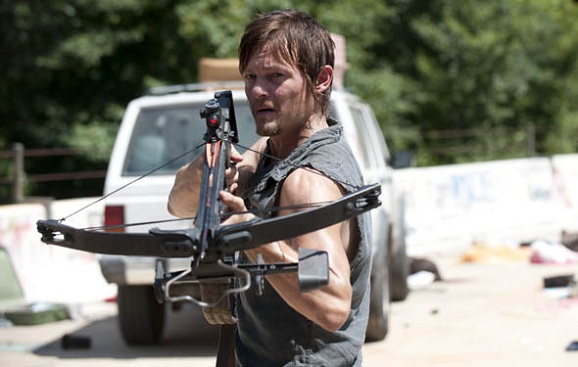 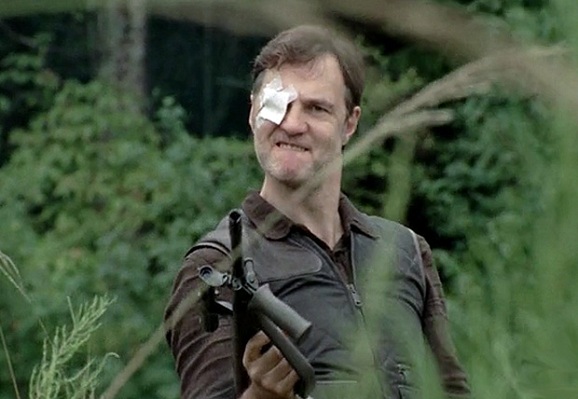 So Axel, the last remaining former prisoner of West Georgia Correctional, took one of The Governor’s bullets to the head, right when he was in the middle of his second sweet conversation with Carol, who is stuck in a story rut of losing absolutely anything she likes and loves. From a creepy, molester-looking dude to a soft-spoken thief who allegedly doesn’t even know how to use a real gun, Axel had about as much character growth as any supporting cast in this series, and his presence will be missed.

That was a really tough choice because we had to have the Governor exact some revenge. If he just shot up the prison without resulting in someone’s death it would have looked completely impotent. So now you start looking at characters and which character is going to go…Unfortunately, the axe fell Axel’s way. It was tough because there may have been more story with him…That was something that I wrestled with almost more than say, Lori, because I knew we were getting story out of Lori’s death. So this was a different kind of death that was tied into the existing story but it didn’t prompt further story… If that bullet didn’t come, maybe there would have been a nice little romance with Axel and Carol. Because I think she really was enjoying that conversation. And it was nice to see her somewhat happy for once.

Nobody wants Carol to be truly happy, obviously. But just as Axel leaves, Daryl comes right back into the story, as if they would have kept a fan favorite away from the group for too long. It makes him leaving in the first place seem kind of frivolous, but I guess he’d just been that blind to Merle’s douchbaggery. Mazzara also talks about Rick’s doom and Daryl’s “trium-flint” return. He doesn’t have any high-quality arrow jokes like that though.

That’s the first time you’ve ever seen Rick since the pilot and said, how is this guy ever going to get out of this? Last week on Twitter a lot of people were saying ‘Curse you, Glen Mazzara, you’ve written Daryl out of the show! He’s off the show now because he left with Merle.’ And I’m just thinking, no, he’s off walking around the woods until he figures out his brother’s a jerk and he comes back at just the perfect heroic moment to save Rick. Because if he didn’t show up, Rick would have been a goner. That arrow comes in and it’s hopefully a Rocky moment where people will cheer.

Given the way the episode ended, heads will definitely roll as soon as next week’s episode begins. I think if Glenn could just give The Governor an Atomic Dickpunch, it could be the only violent act for 30 minutes and I’d be fine with it.