Gillian Anderson Headed Back To Sci-Fi With New Novel Franchise Of the holy trinity behind the success of The X-Files, creator Chris Carter is really the only one who fully embraced sci-fi in his non-X-Files career, while David Duchovny’s rare step back into the genre was for Ivan Reitman’s underrated comedy Evolution. Meanwhile, Gillian Anderson is about to go where neither of her two counterparts have gone before: to the world of original novels. The oh-so-lovely actress has collaborated with the massive brain and imagination of writer Jeff Rovin for a speculative novel franchise called the EarthEnd Saga, to be published through a new Simon & Schuster imprint called Simon451 (a reference to Ray Bradbury’s classic dystopian novel Fahrenheit 451). There no better sign for the state of written fiction than one of the biggest publishers the world showing some genre love with a new offshoot brand.

The first novel in the series will be called A Vision of Fire, and it’ll be published this October. It will follow a world-renowned child psychiatrist named Caitlin O’Hara, whose specialty is treating children who have experienced major forms of trauma. O’Hara has a deaf son who goes a long way in informing her grounded personality. Once she takes a uniquely troubled young girl under her wing, O’Hara finds her world turned upside-down as she discovers the girl’s problems are linked to the universe’s greater forces. As you can imagine, they’ll have to work together in order to save the world in some capacity. While the stream of this plotline is vaguely familiar and derivative of much that came before it, we should all stand around cheering loudly that it’s a book geared towards actual adults, rather than those of the young variety.

Anderson tells EW that Rovin was highly influential in getting her to focus on writing. “But I realized I had ideas hidden within me for a series and a lead character, in this case, a heroine,” she said. “After nine years of living in a semi-science-fictional universe, I think I now have an ingrained knowledge and rhythm for it.” Assuming she doesn’t decide to give her heroine removable cancer and then replace her with Robert Patrick 50 pages before the ending.

Interestingly, she’s entering into the project with a completely open mind, which I’m sure Rovin also helped with, given he’s worked on everything from Tom Clancy tie-in novels to Nintendo game guides. She wanted a story that other women could read, and is leaving the storytelling open for the possibility of future books following different characters or going in different directions. And if you’re thinking that it might one day see a feature adaptation, you’re not alone. Anderson isn’t expecting it at this point, but she’s not against the idea either.

“Our goal is to write a great set of books,” she says. “But the opportunity is quite large, and hopefully we can create something that translates well into other media. I tend to act in more heady stuff…So this could be something interesting and fun that can be added to the mix of things I do.”

It’s been a strong year for Anderson on TV, with winning roles in both the short-form thriller The Fall and NBC’s Hannibal. She’ll soon be seen in the NBC drama Crisis and on the big screen in the GFR-friendly film Our Robot Overlords.

You can catch her in the clip below, yukking it up on a recent episode of The Jonathan Ross Show. 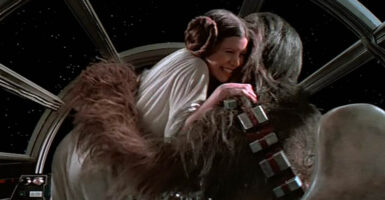