If you didn’t know who George R.R. Martin was before April, you sure all hell know about his famous series of novels, A Song of Ice and Fire. The first installment, A Game of Thrones, was a smash success on HBO with the next, A Clash of Kings, set to take the country by storm next Spring. Martin’s books are widely regarded as some of the best fantasy ever written, but what were his inspirations?

Comics, obviously. Where else would burgeoning fantasy writers get their ideas? Not only was George R.R. Martin a fan, but he managed to get his opinions, both good and bad, published on the “letters to the editor” page of Avengers #9 back in 1964, when the author was just 16. The image appeared first on Twitter, posted by Coheed and Cambria front man Claudio Sanchez, and has been making the rounds. Check it out after the jump. 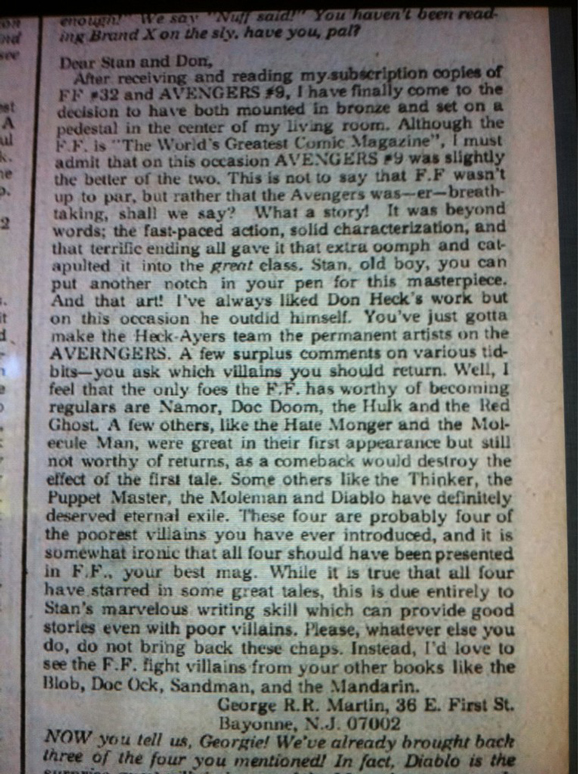 The note is big fun to read not just because it’s Martin, but because of how honest the naive teenager is being with storytellers he clearly idolizes. At one point he even becomes so friendly with Stan Lee that he refers to him as “old boy”. It’s hilarious, and genuinely endearing.

Reading this though you can definitely see that he’s already a skilled writer who uses his words well. This is a really cool find for any George R.R. Martin fans looking for just little bit more insight into their favorite author.