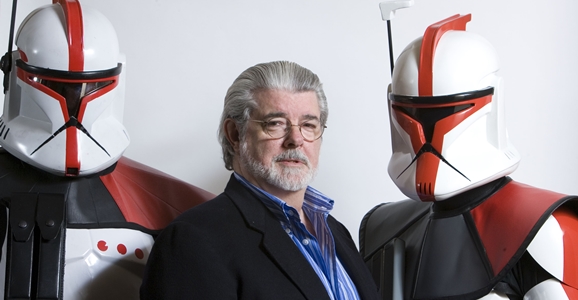 While there has always been a friendly rivalry between Star Wars fans and Star Trek fans, the two science fiction franchises will become indirect cousins when Star Trek Into Darkness director J.J. Abrams brings Star Wars: Episode VII to a new generation of eager movie-goers and science fiction fans. In 2009, Abrams made a very Star Wars-like film with his Star Trek reboot, so it seems absolutely fitting that he’d get a chance to sit in the director’s chair for an actual Star Wars film with Episode VII. But his involvement isn’t the first indirect crossover or influence between the two titanic genre franchises.

Aside from both being science fiction and sharing the word “Star” in their titles, Star Wars creator George Lucas feels that both franchises are closely related. As reported in Hero Complex, the documentary Trek Nation, which was released on DVD yesterday, includes George Lucas talking about why Star Wars “stood on the shoulders” of Star Trek when it was first released in 1977. Lucas contends that Star Trek played a very important role in his space opera, and why the film was ultimately successful with general audiences around the world. Lucas says:

Star Trek softened up the entertainment arena so that Star Wars could come along and stand on its shoulders. There was an effective group of people in the beginning who accepted it..that it wasn’t that far out. For the studios it was way far out, [they said] ‘what is this?’, but there was a fanbase out there — primarily the Star Trek fanbase — who understood sci-fi, understood visual sci-fi, and was ready for something like this (Star Wars) to be in the feature arena.

In today’s pop culture landscape, it seems like the Star Wars and Star Trek rivalry is less important to audiences. These days, people can just be fans of everything, regardless of affiliation or genre. There are plenty of people who love both Marvel and DC Comics movies and comic books. This summer is a perfect example of that, with the success of both Iron Man 3 and Man of Steel. So why shouldn’t people be able to like both Star Trek and Star Wars? Why deny yourself the pleasure of both sci-fi properties? They’re both enjoyable, entertaining, and completely worth your time.

So Star Trek paved the way for Star Wars. In 1979, the success of Star Wars led Paramount Pictures to bring back Star Trek with Star Trek: The Motion Picture, which launched a decades-long film franchise. Many years later, J.J. Abrams’ love for Star Wars informed his approach to the 2009 Star Trek reboot, and Disney and Lucasfilm’s hiring of Abrams will most definitely shape the future of Star Wars. Who knows where the two will go next?

The two-disc Trek Nation DVD is currently available for sale, while Star Wars: Episode VII will hit theaters everywhere during the summer of 2015, in 3D.