Genetically Mutated Silkworms Create Glow-In-The-Dark Silk, Because It’s Cooler Than Not Doing That A group of Japanese researchers recently published a study revealing they’ve been hard at work genetically altering silkworm DNA to produce florescent strands of silk, even going so far as to make the silk viable for everyday use. We all know that mutant animals sometimes end up saving the world, so this sounds pretty radical, right? Cowabunga!

The silk doesn’t just come in one color, either. “When we produced green fluorescent protein in transgenic silkworms, we obtained very beautiful silks,” said study co-author Toshiki Tamura, a molecular biologist at the National Institute of Agrobiological Sciences. “We extended the method to produce three different colored fluorescent silks in large amounts.” The usual suspects of glowing shades are all here: green-tinged (from jellyfish proteins), bright orange (from from the Fungia concinna coral), and a reddish orange (from Discosoma corals). The colors reportedly stay vibrant for more than two years. Amassing more than 20,000 transgenic silkworms, the researchers figured out a different way to turn the raw silk into a workable material, which consisted of changing the cocoon’s cooking temperature, and using an alkaline solution and a vacuum. Not only is the silk usable, but a wedding dress designer already made a few gowns out of them. You know what they say about glow-in-the-dark animals? (See above.) Well, it goes double for wedding dresses, as you can see. I wonder how well it would work in a sleeping bag, and if they could transport it back to slumber parties when I was eight-years-old, so I can be the coolest kid in the tent in the living room. Now they just need to slap a few more colors in there. But not hot pink. That color has been taken. 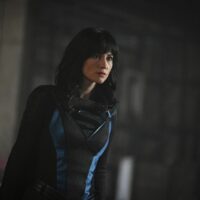