Gareth Edwards Updates Fans On The Progress Of Godzilla

The good people at Legendary Pictures are making it really easy for fans to connect with their favorite movie productions. Legendary Pictures CEO Thomas Tull seems to be encouraging Godzilla fans to take advantage of social media to become more enthusiastic about the new film. A few weeks ago, director Gareth Edwards uploaded a brief video to YouTube to commemorate the first shot of principal photography on the new Godzilla reboot. Since then, Edwards has been releasing a few behind-the-scenes images from the production’s Vancouver, Canada location.

The video above is no different; Gareth Edwards updates Godzilla fans on the film’s progress and reminds them that the new film will be released in theaters in exactly one year. The video also says that this was the first day of shooting with actress Elisabeth Olsen. The 24-year-old performer is part of a world-class cast mostly made up of popular indie and foreign film actors, including Aaron Taylor-Johnson, Ken Watanabe, Juliette Binoche, David Strathairn, Bryan Cranston, and Sally Hawkins, with original Godzilla actor Akira Takarada putting in a special cameo appearance.

Legendary Pictures and Warner Bros. have yet to release an official synopsis for the new Godzilla movie, but according to Gareth Edwards, it will be a more realistic approach to the material. Screenwriter and former Walking Dead showrunner Frank Darabont revised the final version of the script and called the giant radioactive monster “a force of nature.” As for Edwards, he made his directorial debut with the indie sci-fi film Monsters in 2010, so it’s fitting that his follow-up would be another monster movie.

Legendary Pictures also tweeted a new behind-the-scenes image from the set of Godzilla that features a collapsing subway car. Check it out below: 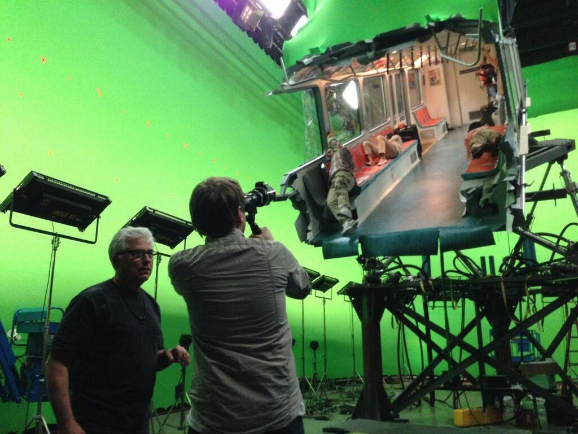