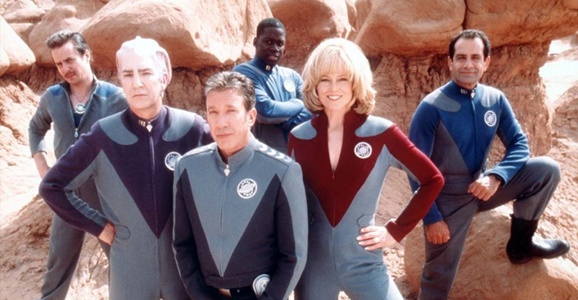 If this was a fair and just universe, Galaxy Quest would have come out and dominated the box office, and we’d all be standing in line for Galaxy Quest XIII right now. The sci-fi comedy deftly skewered the tropes and cliches of Star Trek, as well as science fiction in generals and conventions in particular. As it stands, however, the film did a decent bit of business, pulling in around $71 million here in the States, against a $45 million budget. And obviously those voodoo dolls I picked up at the thrift shop don’t work because here we sit, nearly 14 years later, and there’s only one friggin’ Galaxy Quest movie. But perhaps we shouldn’t give up all hope that the adventures of actors-cum-galactic heroes Jason Nesmith (Tim Allen), Gwen DeMarco (Sigourney Weaver), Alexander Dane (Alan Rickman) and the rest might continue…in some form.

Galaxy Quest producer Mark Johnson has gone on to no shortage of success in the years since the sci-fi comedy hit theaters, having recently served as an executive producer on one of the best damn TV shows in history, AMC’s Breaking Bad, and on Sundance’s critically acclaimed Rectify. We ran across a Flavorwire interview with Johnson from this past April, and while the bulk of it is focused on those two shows, the reporter does lob in the Galaxy Quest question there at the end, god bless ‘em. And the news is…noncommital. But not totally hopeless. So we’ll call that a win, then.

It’s complicated. I can’t get into it because it only gets me angry, because I’m so proud of that movie… For a while there, and someday we may actually get there, we actually talked about doing a television show which would be sort of fun because it would be a TV show looking at a movie that’s looking at a TV show, something like that. So I wish I could answer you and I wish we did have a sequel or certainly a half hour comedy based on it. So we’ll see, it’s not over.

How long can I medically keep my fingers crossed before we enter amputation territory?

It wasn’t just that Galaxy Quest was funny. It totally was, but the reason it worked as more than just a Star Trek spoof is because the script and actors truly breathed life into the characters, the cast of a popular sci-fi TV show who were typecast and have been saddled with that legacy for the rest of their disappointing careers. The notion of this old TV show giving hope to an alien race out in the stars perfectly explored notions of our relationship to fiction, and how sometime even the actions that seemed insignificant to us could be crucially important when viewed by someone else. The core trio of Jason, Gwen, and Alexander were brilliant, but there was no weak link anywhere in that chain and I would absolutely love to see where their story goes from where we were left off. Hell, I’d tune in for a spinoff that only focused on recovering “redshirt” Guy Fleegman (Sam Rockwell).

In addition to the humor and great characters, Galaxy Quest also worked as a solid all-ages sci-fi adventure. People joked at the time that Galaxy Quest was the best Star Trek movie in ages, and if a recent poll of Trek fans is any indication, many still hold that to be true. This is a world, and these are characters, loaded with potential for more adventures.

A big-screen sequel would be amazing, since it would likely bring back all the cast, but even a TV spinoff with new actors could work so long as the right talent was attached. Of course, that could also turn pear-shaped like Amazon’s Zombieland pilot, but still. A guy can dream, right?

By Grabthar’s Hammer, I want some more Galaxy Quest, dammit!