Fox Picks Up Sci-Fi Spec Script, Tranquility Base, For Ridley Scott To Produce 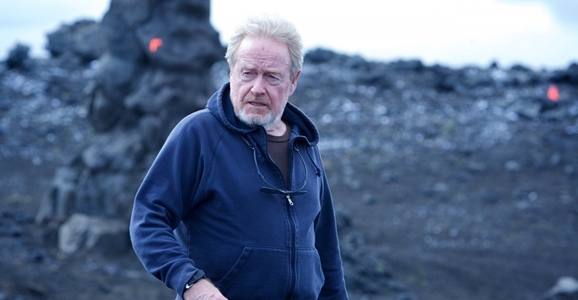 As Ridley Scott develops the sequel for his 2012 film Prometheus, the 75-year-old director will be producing a new science fiction film for his production company Scott Free Productions and Twentieth Century Fox. Scott often produces the films he directs, but sometimes he takes the opportunity just to get a project going from the screenplay to the big screen without taking the director’s seat. (Such as The East with Brit Marling, Park Chan-wook’s Stoker, and Joe Carnahan’s The Grey).

According to Deadline, Scott’s latest science fiction production is from first-time screenwriter Daniel Turkewitz, and it’s called Tranquility Base. There is not much known about the film at this point, but it is believed to have elements of Lord of the Flies, but set in outer space. Of course, Tranquility Base is the location where the Apollo 11 Lunar Module containing Neil Armstrong, Buzz Aldrin, and Michael Collins first landed on the Moon in 1969.

Daniel Turkewitz is a New York University graduate, and received a Masters in Screenwriting in 2001. Turkewitz has written four other screenplays before Tranquility Base, but the forthcoming science fiction film was his first sold and to be produced by a major Hollywood studio.

Ridley Scott is a very busy man these days. Not only is he preparing the Prometheus sequel, but he’s also working on a new science fiction TV series with Generation Kill’s Evan Wright and The Walking Dead‘s Greg Nicotero for AMC. Scott is also teaming up with online entertainment producers Machinima to develop 12 science fiction short films exclusively for the Internet.

At the moment, there is no release date available for Tranquility Base.