Firefly, Ghostbusters, And More Get Kid-ified In Art That Will Make You Go Dawwwww

Guardians of the Galaxy was one of the few true box office saviors this summer, so have having raked in $425 million worldwide so far. While moviegoers might be getting weary of seeing superhero origin stories, Guardians’ tale of how Star-Lord, Rocket, and the rest became a team was so damn charming and funny that it’s almost impossible to dislike. But what if they’d met and decided to guard the galaxy much earlier in their lives? Say, when they were all still knee-high to a Kree? It might look something like this. That adorable little vision is courtesy of artist Patrick Ballesteros, part of his “25 Cent Wonders” series that puts precocious kiddie versions of some of our favorite movie and TV characters into coin-operated equivalents of their iconic vehicles. So you’ve got the Guardians in a Star-Lord’s Milano up top, but how about another beloved crew of space rogues? Or, in honor of this weekend’s Doctor Who premiere, there’s this mini-TARDIS. (Do you think it’s smaller on the inside than the grown-up version?) Having Leia and Lando hitching a ride inside R2 definitely isn’t the obvious choice, but I do love the teensy-weensy Chewbacca. And it looks like Egon got an early start on that whole ghostbustin’ thing. Presumably in between tending to his collection of spores, molds, and fungus. Hopefully Marty and Doc’s junior version of the DeLorean doesn’t actually have to hit 88 miles per hour. And last but not least, a pint-sized Ellen Ripley so cute that even the alien queen couldn’t resist giving her hair a good tussle. She still might punch her inner mouth through Ripley’s head afterwards, but you just can’t please some people. We’ve featured Ballesteros’ work here on the site before, and if you like this stuff, you should most definitely hit up his site and see the rest of what he has to offer — including kiddie versions of Sherlock Holmes and Watson, the Neverending Story crew, and even Walt and Jesse from Breaking Bad. You can also order prints of all of the above and more via his online store. 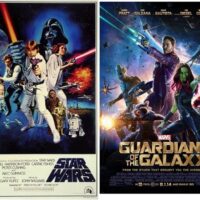 The Force Awakens Trailer Collides With Guardians, Goes Retro, And Gets Bay-ified 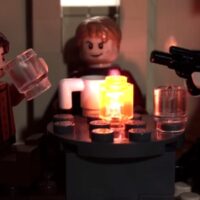 Firefly, Guardians Of The Galaxy, And Star Wars Get A Weapon-Friendly Lego Mash-Up 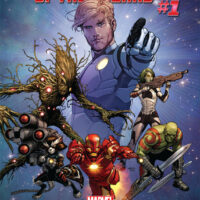 Guardians Of The Galaxy Trading Cards Include Iron Man