Watch the Firefly reunion even if you're not at Comic-Con.

As we speak, hordes of hyper, sweaty, excitable people are sitting in line in San Diego, just waiting for the chance to get a first-hand glimpse at something they love. Some hope to get an early look at upcoming flicks like Zack Snyder’s Man of Steel or Guillermo del Toro’s Pacific Rim. Others want the dope on what’s to come in shows such as The Walking Dead or Game of Thrones. But one of the more passionate groups is gathering to celebrate a show that only aired one season and has been off the air for a decade. If you’re a loyal Browncoat all broken up that you won’t be in San Diego to see the Firefly reunion panel, fear not: you’ll get a chance to see it later on TV.

This week’s Firefly panel is going to be filmed for use as part of a Science Channel special entitled Browncoats Unite. Delving into behind-the-scenes stories and examining the legacy of Joss Whedon’s “space Western,” Browncoats Unite is set to air on November 11th. The panel will include appearances from pretty much the entire Firefly line-up: creator Joss Whedon, Nathan Fillion, Adam Baldwin, Alan Tudyk, Summer Glau, and writers Tim Minear and Jose Molina. The special will also include a behind-the-scenes roundtable interview hosted by Entertainment Weekly’s Jeff Jensen.

“Why is this airing on the Science Channel?” you might ask. The network has been airing Firefly reruns for a while now, and will ramp up to the Browncoats Unite premiere with a marathon of Firefly episodes. Here’s what Debbie Myers, General Manager and Executive Vice President of the Science Channel, had to say:

FIREFLY is a landmark work of science fiction and a favorite with our viewers. Ever since it premiered on SCIENCE, fans have asked us to do something special to mark its 10-year anniversary. With this signature celebration, punctuated by BROWNCOATS UNITE, we will connect the minds behind this classic franchise with its legions of passionate fans.

The Firefly panel will go down on Friday, July 13th, beginning at 12:30 PM PT in Room 20. If you’re not already in line, you’re probably screwed. As for the rest of us, now we have to figure out where the hell Science is on our channel line-up.

Morena Baccarin: Will She Appear In Deadpool 3? 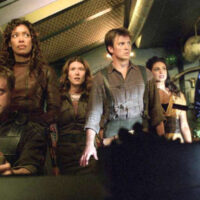