Firefly Is Getting A Board Game! Board Games Are Getting Firefly!

Hasbro recently ran a voting promotion, one that I wrote a story about for this site, which ended with them replacing their iron token with a cat token. Instead of a robot token. Not that the idea was that wonderful in the first place, but a cat won. Now you can build property in a fake Atlantic city with a cat instead of an iron. Anyway, my point is, “Fuck you, Monopoly. We’ve got Reaver fish to fry.”

Firefly is getting a board game, ya gorram turkeys. The game’s creator, Gale Force Nine, has now become the coolest company around by not only announcing a fall 2013 release for Firefly: The Game, but by releasing it as “the first in a series of tabletop hobby boardgames and miniatures games from GF9 set in the Firefly universe.” My non-video gaming tends to run along the lines of Drinking Scattergories, but this could pull me back in, so long as it doesn’t spill my drink. In the game, you become Mal, just a lamer version because you’ll never be Mal like I will, and you captain your own Firefly-class ship, bopping between planets with your own crew. Would you like to pretend that Firefly aired long enough to jump the shark? Then add Wash’s younger cousin, Terry, to your crew. You’re a captain desperate for jobs, willing to make money in any way possible. It won’t be easy, pilgrim, as crooked employers, the Alliance, and those pesky old Reavers are around every corner that doesn’t exist in space. I just hope there’s not an “Out of Gas” mode where you have to get shot in the stomach to win the game backwards.

Hoping to carry on the good word of mouth GF9’s previous Spartacus: A Game of Blood and Treachery has going for it, the company’s CEO, John Kovaleski, says, “With challenging gameplay, fantastic production values and compelling narratives, you and your fellow captains will want to head out into the big black again and again.” It’s a four-player game, so maybe if you readers are lucky, you’ll one day be able to watch the Giant Freakin’ Robot writers playing the game with one another via Skype. Oh, look at that, you just broke 10 mirrors. Not lucky at all. But still, Firefly board game! 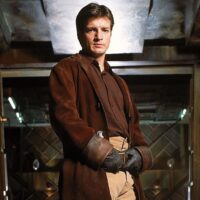