Regardless of how you feel about the films that J.J. Abrams delivers, you have to admit the man has a Ph.D. in Promotion, even when it isn’t exactly honest. (See: Star Trek Into Darkness.) And now, via the Bad Robot Twitter page, he has already begun the lengthy process of making everyone sick to their ripped-open Tauntaun stomach of Star Wars: Episode VII teasers. Well, at least I think it’s an Episode VII teaser. I guess the whole point of it involves not knowing exactly what the above picture actually stands for. Check out the full recent tweet below to get an arguably better idea.

Three scripts atop one another with the Bad Robot logo on the covers. Notice the red pages. Notice the wood grain of the table beneath it. These are all clues. In fact, if you look at the first letter of each word in the tweet, it spells out “Hot Pcygwbtc,” which is almost definitely one of the new villains that the upcoming Star Wars trilogy will center on. Of course, none of what I’m saying makes any sense or is actually true, but it’s exactly the kind of mind melting that Abrams get off on professionally.

After all, this might not have anything to do with screenwriter Michael Arndt’s script for Episode VII. This could be one of any number of other Bad Robot projects. Maybe it’s the touched-up Rod Serling screenplay that Abrams was working on. You’d think he’d want to get that out of the way before devoting such a huge chunk of his life to Disney and the Force.

It might just be Harrison Ford’s list of trailer demands. Speaking of Han Solo, Ford spoke with MTV News recently – not much about Ender’s Game, who’d have thought? – and while he was “not prepared at this time to have an in-depth discussion about – what did you call it again – Star Wars,” he did share a few words on how he felt about Abrams taking over the reins.

“I think he’s a great storyteller,” he said. “He’s developed an enormous filmmaking skill. I think it’s a daunting project and he’s the kind of guy that can take on huge challenges and deliver… He’s an awful nice guy.” You heard it here first, folks! Ford thinks Abrams is an “awful…guy!” Kidding, of course. The two have known each other since Ford made Regarding Henry back in 1991, which Abrams wrote the screenplay for.

Sound off in the comments on what you think these red-bound scripts really are. Conspiracy theories are most welcome. 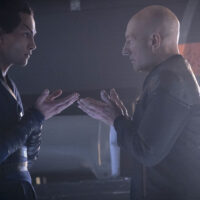