Fanboys Flops At The Box Office 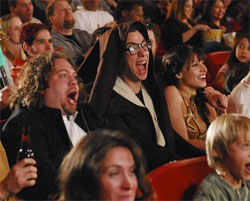 After delays, controversy, and years in development hell, the much anticipated geek movie Fanboys hit theaters this weekend. See it fast, it may not be there for long.

The movie opened in an extremely limited run. Only 44 theaters, mostly in New York and Los Angeles,. Granted with such a limited release you don’t expect big box office, but to have any hope of expanding into a wider release it probably needed to make more than $164,000.

Yep, that’s the number being reported by Box Office Mojo as the movie’s opening weekend take. Fanboys opened in 34th place. To put that into perspective, a movie called The Class, which has been out for a couple of weeks now, played in 27 theaters and managed $192,000.

If you break it down by per-screen average, then things don’t like quite as bad. Fanboys earned an average of $3,727 per screen. That’s more per screen than Paul Blart: Mall cop, which earned $3,471 per screen. Except Paul Blart: Mall Cop is in its fourth week of release and has nothing to prove. Fanboys does and if fans wanted to see it open wider, the movie probably needed more support from those of you in cities where tickets were available.

It now seems pretty unlikely that the movie will expand any wider. Actually there’s a fairly good chance that by next week, it won’t even be in most of those 44 theaters it’s currently in. If like me, you’re stuck in a city where it’s not playing, plan on waiting for the DVD.

For those of you in cities where it is playing… get out there and see it right away. It may be gone by Friday. Here’s a complete list of locations where (at least for the next 4 days) you can find Fanboys playing, courtesy of AICN:

And by way of reminder, here’s the official Fanboys trailer: