Check Out The Blu-Ray Trailer For E.T. The Extra-Terrestrial

It has been 30 years since Steven Spielberg’s seminal film, E.T. The Extra-Terrestrial, was released in theaters. The story of a family that comes together after a brutal divorce when a mysterious, lovable alien crash lands in their backyard took the country by storm and was seen as an instant classic upon its release. It went on to garner nine Academy Award nominations, including Best Picture and Best Director, and won four Oscars, including Best Visual and Sound Effects.

To commemorate the 30th anniversary, Universal Pictures and Amblin Entertainment will be releasing an awesome Blu-ray/DVD combo pack with digital copy and UltraViolet access. They will be also releasing a ridiculous Amazon.com exclusive $140 limited edition collector’s set Blu-ray/DVD combo pack that comes with a shiny replica of E.T.’s spaceship. The Amazon.com exclusive set seems a bit excessive (but at the same time very cool). It actually plays John Williams’ Academy Award-winning theme from E.T. when you open the  spaceship, and a miniature version of the extraterrestrial himself pops out. The Blu-rays and DVDs are actually housed inside of the spaceship.

The bonus features include behind-the-scenes featurettes, a look back at the pop culture sensation the movie created, and some deleted scenes. It’s unclear if Steven Spielberg’s restored cut of the film, which was released in theaters for the film’s 20th anniversary in 2002, will be included, but we can certainly hope not. Spielberg himself admitted that the edits he made to that version were a mistake. The set will also feature bonus material for your iPhone and iPad.

E.T. The Extra-Terrestrial will be released on Blu-ray on October 9th. 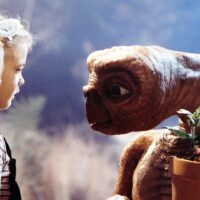