WTF, CBS? Against my better wishes, I am anticipating the shit out of the network’s newest mystery drama, Extant. In my mind, it’s the perfect kind of show. A strong female lead in Halle Berry, a conspiracy-laden plot that is heavily invested in potentially supernaturalish space travel, and androids. It’s really a surprise that CBS teamed up with Stephen Spielberg’s Amblin Television to produce this high-concept series; at least, until you watch the clip above, and it becomes frustratingly clear that the network is not going to be upping its game with this one.

If you haven’t watched yet (or even if you have), let’s talk about why this Entertainment Weekly-released clip should be a hell of a lot more interesting than it is. Extant centers on astronaut Molly Woods (Berry), whose return to Earth following a year-long solo space mission is fraught with problems, both with her husband and bionic son, and with her government superiors. Because, you see, Molly somehow got pregnant in space.

Which brings us to the above clip, in which Molly first comes face-to-face with her seemingly impossible visitor within the spaceship. Marcus Dawkins (Sergio Harford) was an ex-lover of Molly’s before she started her family. The implications of him being up there, and asking for help, doesn’t make a hell of a lot of sense, and the clip could have been a great time to answer some questions. Instead, it’s over two minutes of slow reaction shots and conversation. In the first place, Molly should have been screaming loud enough to wake up people back on Earth, but she doesn’t seem to be too bothered by his presence, nor the fact that he’s walking perfectly while she’s halfway floating around in the lessened gravity.

Don’t get me wrong, Berry looks exactly as frightened as she should be, especially when they go through the “I’m gonna touch your face” part, which she is not at all reluctant to allow. But then he slides his finger down her chest and to her stomach — perhaps signaling her pregnancy? — and then he holds her face until it looks as if she drifts off to unconsciousness. “It’s okay. It’s okay. No means yes. No means yes.” I almost feel like I know even less now, plus I’m no longer as excited about seeing her in space if all it’s going to be is long stares and cheek holding.

Molly’s pregnancy is a problem not only because she didn’t have anything human to conceive with, but because her womb was supposed to be barren. That’s why her inventor husband John (Goran Visnijic) created their cyborgian son Ethan (Pierce Gagnon) in the first place. Nothing spells family drama like an alien ghost baby.

Take a peek at the latest trailer to see Ethan in action.

Will Extant prove to be gripping television, or will it just become a plot run amok like Under the Dome? Find out when it premieres on Wednesday, June 9. 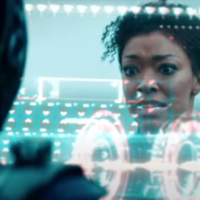