Europa Report To Have New York Premiere At Hayden Planetarium 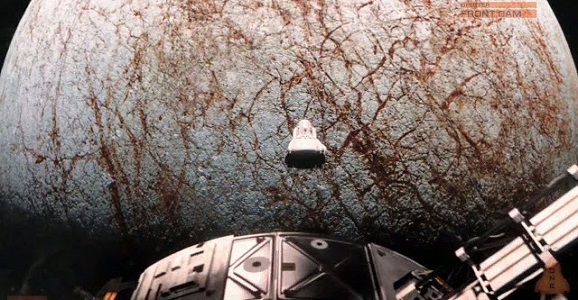 There is no doubt that 2013 is a big year for science fiction, packed full of films like Star Trek Into Darkness and Pacific Rim. Of course, we’ve seen some duds such as Oblivion, After Earth, and Man of Steel, but there are also plenty of sci-fi movies still on the way, and many of them will lean more towards the cerebral, including Alfonso Cuarón’s Gravity, Neill Blomkamp’s Elysium, and the upcoming Europa Report from Ecuadorian director Sebastián Cordero.

Although the science fiction found-footage film is currently available on Video On Demand for people who have cable television, Europa Report will invade theaters this August. The film’s theatrical premiere is set for August 1, and it will screen in the giant dome at the Hayden Planetarium Space Theater. If you live in New York City, this is probably the best way to watch a film like Europa Report: on the big screen and in a massive planetarium dome.

MILD SPOILERS FOR EUROPA REPORT BELOW!

The found-footage film incorporates actual scientific data to inform Europa Report’s story of a journey to the sixth moon of Jupiter. The film explores themes of human isolation, mistrust among crewmembers, and privately funded space missions. One of the most interesting things about the film is not whether or not life exists outside of Earth, but rather the circumstances of the mission itself, and the notion of sending astronauts to Jupiter instead of probes. Europa Report is more about what goes wrong during the manned mission that leaves these astronauts stranded. I wonder what Neil deGrasse Tyson has seen it yet.

After an unmanned probe brings back data about a hidden ocean that could exist beneath Europa’s frozen surface, a corporation called Europa Ventures bankrolls a privately funded expedition to send six astronauts to explore Jupiter’s moon and see if there is any life in its vast, icy oceans.

While on its yearlong journey to Jupiter, massive technical failures lead to the loss of communication with Earth. The crew must now survive the psychological and physical toll of deep space travel, while also collecting data and research on Europa. But when they discover something in Europa’s oceans, the astronauts realize that it’s something more profound and terrifying than they originally believed.

The film’s director, Sebastián Cordero, will be available at the Hayden Planetarium Space Theater for the Europa Report premiere. After the film screening, there will be a Q&A with the director about the film’s themes, mysteries, and immaculate photography.

Europa Report is now available on Video On Demand, and opens in theaters on August 2.

For tickets to the Europa Report premiere at the Hayden Planetarium Space Theater, please visit the American Museum of Natural History’s website. You can also read Nick’s review of Europa Report right here.