The Ender’s Game production blog is only a month or so old, but it’s already provided several cool looks behind the scenes of the long-awaited film. So far we’ve seen Ender’s room, Ender’s neck implant, hell, even Ender’s chair. Now the blog has posted a new update, giving us a look at one of the book’s most iconic locations: the zero-g training room! Well…sort of.

The latest blog post does indeed show the filming of one of the zero-G training sequences, but at this stage in the production that basically involves a green screen, director Gavin Hood consulting a storyboard of the sequence, and a bunch of crew members standing around. Hey, they can’t all be groundbreaking… 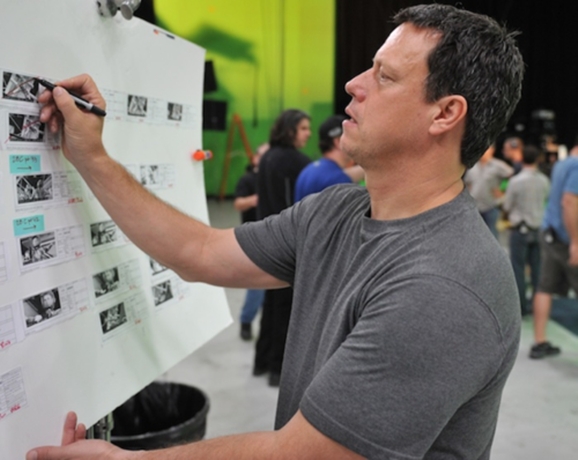 If you’re not familiar with Orson Scott Card’s original novel, Ender’s Game involves young Andrew “Ender” Wiggin, who is drafted at a young age to train as a future fleet commander in humanity’s war against the insectoid “Buggers.” One of the ways Ender and his fellow students train at battle school involves zero-g games designed to teach strategy, communication, and leadership skills. If they do it right, the sequences could play like an even more dizzying version of Harry Potter‘s Quidditch, only with higher stakes.

Here’s what the blog has to say about the zero-g filming process:

Let’s just hang the kids from bungee [cords], roll camera for ten hours and see what we get!” That was plan A. Which is why we are not directing the movie and instead Gavin Hood is. We never thought we would find a bigger fan of the novel than all of us until Gavin walked in the room. Going back to his roots, Gavin decided to take on the challenge of adapting the novel himself, which gives him a huge advantage when it comes to directing it because he knows his script better than any of us. And given the time limitations inherent in working with young actors, this movie would be impossible to complete without Gavin’s preparation and passion. Here you see him crossing off a completed shot of his detailed story boards in the zero g battle room where our young actors, in their zero g training suits, are showing off the high flying skills they’ve learned from our veteran stunt coordinator Garrett Warren.