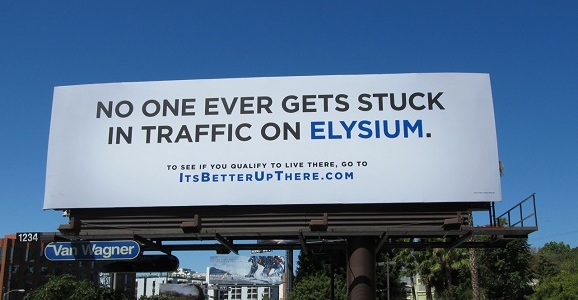 If you want to advertise better living to people who have the money to grant themselves a more comfortable life, the first two places you’d probably think to do it would be in Los Angeles and in New York. And wouldn’t you know, that’s just what some crazy new realty company did recently, when they stuck billboards up in L.A. and in New York’s Time Square. How am I supposed to know what soda to drink or what underwear to buy if this billboard is taking up all the ad space?

Neill Blomkamp’s upcoming sci-fi actioner Elysium is ramping up its viral marketing, as these photos — via Coming Soon — show just how far the marketing is willing to go to get people interested. The “It’s Better Up Here” website still lets you apply for citizenship, and features a trip to other websites dedicated to welcoming all potential citizens to the luxury of Elysium. (Occupy Elysium would happen immediately, I bet.)

Both billboards appeal to daily commuters, promising “No one ever gets stuck in traffic on Elysium.” It’s a clever ploy, and I like the simple design. They picked two cities with extremely large public transportation systems, and we all know public transportation has a way of attracting less-than-ideal citizens, so i bet they’ve got their “rejection” stamps handy up there in their application-surveying cubicles. What do you mean this is just a movie? Check out the Times Square sign below. 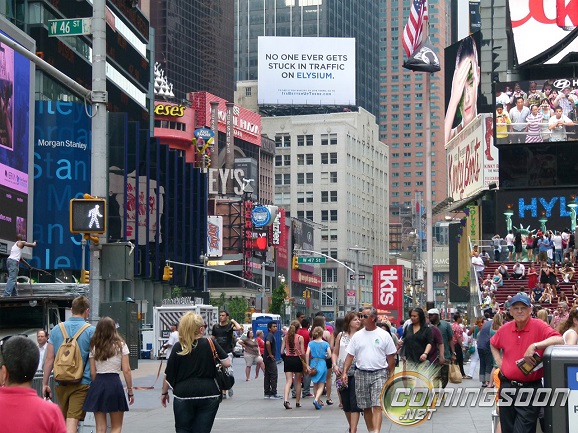 I really hope somebody posts pictures of a guy in an exoskeleton riding the bus to work soon. Elysium, starring Matt Damon, Jodie Foster, and Sharlto Copley, hits theaters on August 9. Check out the latest trailer below, and the next time you’re caught in bad traffic, just count to three…and then loosen your grip on the other driver’s throat.